Mabel Painter Lowe
Fiona Hepler Lowe
Nixie Barbara Lowe
Charles Davis "Chad"Lowe II is an American actor, director, and producer. He is the younger brother of actor and comedian Rob Lowe. Chad has won an Emmy Award for his supporting role in Life Goes On as a young man living with HIV. He has had recurring roles on ER, Melrose Place, and Now and Again. Lowe also played Deputy White House Chief of Staff Reed Pollock on the sixth season of 24.

For Disney, he played as Byron Montgomery in Freeform's Pretty Little Liars. He also guest starred in Lifetime's Drop Dead Diva and Freeform's Famous in Love. In addition, he has directed episodes for ABC's Brothers & Sisters, American Housewife, and Twisted. 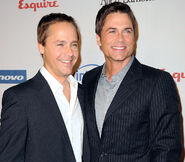 Chad Lowe with his older brother, Rob in November 2008.