Luath from The Incredible Journey

To get home (both films)

The bears, the mountain lion, Ashcan and Pete, Jack and Ralph

Being left behind, danger, being rejected, being locked up, hunger

Welcomes Delilah into the family and becomes her mate.

"I can't help it! I'm starving!"
"Hey, losers! You lookin' for me?"
Chance is an American bulldog and the deuteragonist from the Disney film Homeward Bound: The Incredible Journey and its sequel, Homeward Bound II: Lost in San Francisco. He was voiced by Michael J. Fox in both films.

Chance is a young, immature American bulldog owned by a young boy named Jamie who cares for him very deeply. Given his early life, he was abandoned as a puppy and sent to the pound. Fortunately, he was adopted by Jamie and given a home. His pet comrades are Shadow, a wise, old golden retriever and Sassy, a Himalayan cat who is constantly annoyed by Chance's antics and is usually tortured by him. Due to his immaturity, Chance has a tendency to get himself (as well as his pet comrades) in trouble. He considers Shadow an old fusspot and calls him "old timer," but still has respect for him. His fear of going to "the bad place" seen in the second film leads him and the others to be left behind.

Chance with Shadow and Sassy in Homeward Bound: The Incredible Journey 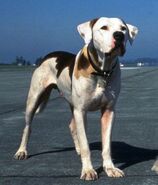 Chance in Homeward Bound II: Lost in San Francisco
Add a photo to this gallery