Porkenstein (referred to by Robbie)

"La-la."
Charlene Sinclair is a Protoceratops and one of the protagonists from Disney's 1991-94 television series, Dinosaurs. She is one of the five main protagonists of the show, although apparently the least seen and known of the main characters.

She is Earl and Fran Sinclair's fashion-obsessed daughter on Dinosaurs. Beginning the series at twelve years old, her budding physical maturity is represented by the growth of her tail in "Charlene's Tale". Charlene is generally more interested in school popularity and the comforts of shopping than with real issues and her typical phrase is a rapid chant of "La-la." She frequently gripes about her family or vents about her lack of social status with best friend Mindy.

Charlene's material-mindedness contrasts with the social concerns of her big brother, Robbie. On a typical basis, the shallow Charlene emotionally torments and condescends her older brother, often snitching on Robbie and taking pleasure in his misfortune and times of embarrassment. On several occasions, she has also made it clear on her lack of regard for Robbie the most out of everyone else such as asking to have his room after he was apparently eaten by a swamp monster. However, over the course of the series, she gradually develops a greater appreciation of her family, of serious causes, and of the role of female dinosaurs, and she awakens to the possibility that there's more to life than the allowance, popularity, and cute guys. She demonstrated maturity by watching the Baby ("When Food Goes Bad"), and later comes to appreciate her family, despite Earl's denseness and lack of knowledge of his own offspring, after spending time with Henri and Simone Poupon in "Getting to Know You." Other achievements include performing as part of the Sinclair Sisters for the USO ("Nuts to War"), gaining temporary fame from training the Cavelings ("Charlene and Her Amazing Humans"), and getting hired by WESAYSO as Earl's supervisor ("Working Girl"). She also discovered that the world is round, and not flat when her muse mistook her for Copernicus in "Charlene's Flat World". Her idea that the world is actually round by walking on it in a straight line was proven correct.

The final episode demonstrated how Charlene "Gimme" Sinclair had progressed from the days when, upon learning of Robbie's likely death, he planned to turn his room into a "memorial walk-in closet" (Episode 223: Leader of the Pack). In "Changing Nature", Charlene champions the cause of Stan, the last Bunch Beetles, after corporate development leads to the extinction of his kind. 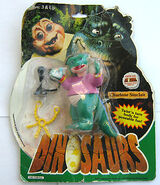 "I believe there should be a... a law that guarantees everybody the right to say what they think, no matter how unpopular their ideas might be."

Charlene and her best friend Mindy.
Add a photo to this gallery

Retrieved from "https://disney.fandom.com/wiki/Charlene_Sinclair?oldid=4237267"
Community content is available under CC-BY-SA unless otherwise noted.