To preserve the magic in the Disney Parks

Disney, Maybeck , to be a DHI

Charlene Turner is a 15-year-old girl from Orlando. She is a main character of the Kingdom Keepers book series by Ridley Pearson.

She is one of the five kids that modeled as DHIs (Disney Host Interactive or Daylight Hologram Imaging) to become holographic guides to the Disney Parks. She is the jock of the Keepers. Their goal is to stop the Overtakers from controlling the parks.

Charlene is an overachiever girl turned covert DHI team member. This girl is a cheerleader, dancer, track runner and champion gymnast. All that and a Scrabble wiz plus a keen ability to decode anagrams. But she’s still scared of the dark, and extremely afraid of Maleficent. Charlene is the most easily frightened of all the DHI kids. But despite some whining and a bit of boy-craziness, Charlene is good with people and can make friends with anyone.

Charlene on Disney After Dark

Charlene on Disney In Shadow 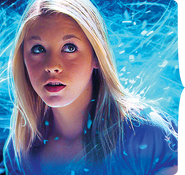 Retrieved from "https://disney.fandom.com/wiki/Charlene_Turner?oldid=2801794"
Community content is available under CC-BY-SA unless otherwise noted.