Laughton was trained in London at the Royal Academy of Dramatic Art (RADA) and first appeared professionally on the stage in 1926. He played a wide range of classical and modern parts, making a big impact on Shakespeare at the Old Vic. His film career took him to Hollywood, but he also collaborated with Alexander Korda on some of the most notable British films of the era, including The Private Life of Henry VIII.

Among Laughton's biggest film-hits were The Barretts of Wimpole Street, Mutiny on the Bounty, Ruggles of Red Gap, Jamaica Inn, The Hunchback of Notre Dame and The Big Clock. In his later career, he took up stage directing, notably in the Caine Mutiny Court Martial, and George Bernard Shaw's Don Juan in Hell, in which he also starred. He directed the acclaimed thriller The Night of the Hunter. In 1927, he was cast in a play with his future wife Elsa Lanchester, with whom he lived and worked until his death. They had no children.

He was caricatured in many Disney cartoons. He was originally cast as Lord Glenarvan in In Search of the Castaways, but was replaced by Wilfrid Hyde-White, due to his death.

Charles Laughton as the King of Hearts in Thru the Mirror 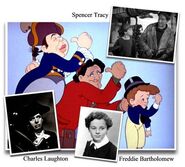 Charles Laughton in Mother Goose Goes Hollywood
Add a photo to this gallery
Retrieved from "https://disney.fandom.com/wiki/Charles_Laughton?oldid=4202009"
Community content is available under CC-BY-SA unless otherwise noted.