Fortinbras (dog)
Charles Wallace Murry is a character from the movie A Wrinkle in Time and its 2018 remake.

He's a kid genius, the son of Dr. Alex (or Jack) Murry and Dr. Kate (or Dana) Murry. He is wise, kind, gentle, and a loving brother to his sister, Meg.

When their father goes missing, Meg and Charles use the power of the tesseract to travel to the planet to the planet Camazotz to rescue him from the evil cybernetic organism called It (or Red). Although Alex/Jack is freed from It/Red's control, It/Red takes over Charles's mind, turning Charles into one of It/Red's servants. Meg uses her love for Charles to free Charles from It/Red's control, which in turn destroys It/Red. 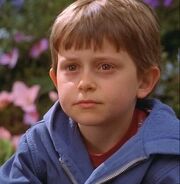