To see his daughter again

His wife, his daughter, jokes, hide and seek

Reunited with his daughter

"Come to Papa!"
"You see, Kelpcake? There's always another way."
"My baby! Let me look at you!"
"Caution: Joker at Work!"
"Go get em', Kelpcake!"
"Oh honey no no no kelpcake!"
Charlie is Dory's father and a supporting character in the 2016 Disney/Pixar computer-animated feature film, Finding Dory.

Charlie lived his whole in the Marine Life Institute where he met and fell in with another Regal Blue Tang fish named Jenny. They married and had a daughter named Dory. However, Dory was born with a mentally unstable memory loss which Charlie and Jenny dubbed as "short-term memory loss." To help their daughter, Charlie and Jenny would find ways to help Dory remember things. Although Charlie and Jenny loved and cherished their daughter, they secretly worried that Dory's memory may never improved as she grows up so they grew overprotective of her and kept her by their side every day.

Charlie is square shaped, with fat but short dorsal fins. His eyes are lavender, his eyelids are slightly darker, and he has the least amount of black on his scales in his family. Just like his wife and daughter, he has slightly bucked flat teeth.

Charlie is very silly and happy, calling his daughter by fun little nicknames, cracking jokes, and coming up with fun rhymes for his daughter to remember important things. He is also very helpful and kind, helping his daughter retrieve shells and comforting his family when needed. He is shown to be protective, holding his daughter away from danger and shielding his wife. He is also shown to be a bit forgetful, Jenny having to sometimes finish his sentences and remind him of something. It is possible he may have had short-term memory loss as a child before slowly growing out of it, unlike his daughter.

Charlie is first seen through many flashbacks of the movie. The first is when he praises his daughter for saying her introduction to other fish correctly, clapping happily for her. He then attempts to teach her to play hide and seek with his wife, but after she becomes distracted he saves her from the undertow current, grabbing her safely in his fins and reminding her of the rhyme he made up for her about avoiding the undertow. When she does not remember it, he has a concerned look on his face before instantly comforting his daughter about forgetting. When she asks her parents if they will forget her if she forgets them, he joins his wife in promising her that they will never forget her, cuddling her with his wife.

In the second flashback, he praises Dory for finding another shell, picking it up and setting it in the shell path, smiling at her affectionately.

In the third flashback, he comforts Dory with his wife as she cannot get a shell out of the sand. He jokingly tells her that if life is too hard, to give up, much to the shock of his wife, who he assures it was a joke before wiggling the shell out of the sand with his tail and placing her in the shell, pushing her home. He then tells her that there's always another way and hugs her.

In the fourth flashback, he grabs Dory just in time before she collides into a sunfish, setting her down and telling her to be careful. He joins his wife in song as she makes up the song "Just Keep Swimming".

In the fifth flashback, he appears as a ghost flashback four times. In the first one, he sets down a shell Dory found into the shell path, both he and his wife explaining how if she ever gets lost, to follow the shells back home. In the second one, Dory happily exclaims that she lives in the coral home, Charlie praising her for remembering. In the third, he once again tries to teach Dory hide and seek with his wife. In the fourth, he asks Dory who she's talking to as she speaks whale with Destiny through the little pipe above their home. In the real flashback, he comforts his crying wife as she expresses her fears for their daughter's future, calming her down. He swims out with his wife, calling her name when they do not see her in bed, and he swims as fast as he can to his daughter, nearly reaching her before she is swept away by the undertow current and sucked into the pipe that leads to the ocean.

He is finally seen not as a flashback carrying several small shells with his wife as they return home to the Old Tire. He freezes up at the sight of his long lost daughter, before swimming as fast as he can with his wife and embracing his daughter, promising to never let her out of his sight again. He refuses to let her apologize and lets his wife explain how they have stayed in the same spot, setting down shells so she could find them again. He expresses concern and sorrow when he thinks she has been alone for all these years.

He swims with her and Jenny as she tells them the stories of her adventures, (happy he has not there to see her get stung and swallowed) and as she is about to get flipped into traffic he joins his wife in begging her not to go, afraid of losing her again. When Dory falls back into the ocean with Hank, he opens his fins and shouts, "Come to Papa!" (in slow-motion)

He is last seen playing hide and seek with his daughter, wife, and friends, before swimming with his wife to their new home on the reef, making her promise to swim with them later. He appears one last time as a final flashback, proudly telling his daughter she followed the shells all the way back home as a baby, allowing her to play with the other children, smiling proudly with his wife.

Dory is Charlie's only baby and daughter. They are shown to have a very good relationship when Dory was a baby, as Charlie protected her from danger, helped her retrieve shells, joked around with her, hugged her, and called her adorable nicknames that made her smile. He was always by her side, patient and caring and comforting. When comforting his wife who was crying about Dory's future, he showed his own sorrow while comforting her, but trying not to let it show. He screamed out his daughter's name as she got swept away by the undertow current. He is very determined to get his daughter back, as he and his wife escaped into the ocean to search for their little girl. He spent years with his wife in an old tire, creating hundreds of shell paths to try and bring his baby home.

When he sees his daughter again several years later, he embraces her, crying with joy and happiness and comforting her as she tried to apologize, even calling her "kelpcake" again. He and his wife told the story to her about how badly they wanted to see her again. When Dory was about to get flipped into the air, he begged his daughter not to go, afraid of losing her once again but letting her go once she explained with love and affection that she could always find them again. When he thought the truck was taking his baby away forever he cried with his wife, but once reunited with her he screamed "Come to Papa!" and opening his fins waiting to embrace her.

In the epilouge, Charlie is shown to still have a good relationship with his daughter, playing hide and seek and telling her to come home later for a family swim.

Jenny is Charlie's wife. The two are shown to have a very compassionate relationship, as Charlie jokes with her, comforts her, and adds on to her teaching lessons for Dory. She is also shown to love him very much as she laughs at his jokes, finishes his sentences when he can't, and trusting him to comfort her as she cried. The two stayed together after losing their daughter, and after so many years continued to stay close.

In the end, they are still very close, living together in a new home and holding fins as they swim away.

Although he doesn't actually know them, he hugs them and thanks them for looking after his baby, showing he's grateful. They also appear to be close enough to play hide and seek with. 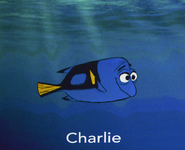 Jenny and Charlie admiring their daughter. 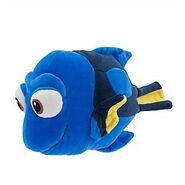 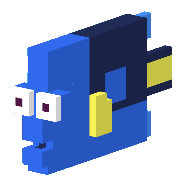 Charlie Hugging her daughter
Add a photo to this gallery

Retrieved from "https://disney.fandom.com/wiki/Charlie_(Finding_Nemo)?oldid=3735217"
Community content is available under CC-BY-SA unless otherwise noted.