1984-present
Charles Michael "Charlie" Adler is an American voice actor and voice director who is best known for voicing Ickis in the Nickelodeon series Aaahh!!! Real Monsters, Buster Bunny in the Warner Bros. animated series Tiny Toon Adventures, Ed and Bev Bighead in Rocko's Modern Life, Professor Monkey-For-A-Head in Earthworm Jim, Snively in the SatAM version of Sonic the Hedgehog, Doctor Doom in The Super Hero Squad Show, the titular characters Cow and Chicken, along with the Red Guy in the Cartoon Network series Cow and Chicken and I Am Weasel, and Starscream in the Transformers film series.

For Disney, he provided voice direction for The Buzz on Maggie. He also cast and voice directed nine episodes of Season 2 of The Emperor's New School (the rest were by Ginny McSwain and Jamie Thomason), almost all episodes of The Replacements (the others were by Jack Thomas), and the pilot episode of Phineas and Ferb, along with Jamie Thomason.

Additionally, Adler had multiple voice roles in Disney films and television shows that are listed below.

The Weasel Guards
(The Prince and the Pauper) 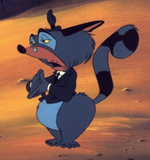 MODOK
(Phineas and Ferb: Mission Marvel)
Add a photo to this gallery
Retrieved from "https://disney.fandom.com/wiki/Charlie_Adler?oldid=4381867"
Community content is available under CC-BY-SA unless otherwise noted.