Disney Wiki
Register
Don't have an account?
Sign In
Advertisement
in: Characters, The Mighty Ducks characters, Males,
and 6 more

Inducted into Fictitious Athlete Hall of Fame in 2016

Linda
Charlie Conway is the leader, heart, and soul of the team. Although not the fastest, skilled, nor strongest player, Charlie is extremely loyal to the Ducks and to his coach, possessing the greatest leadership qualities among his teammates.

In The Mighty Ducks, Charlie was skeptical of the new coach like most of the team, especially when Coach Bombay attempted to have the entire team cheat by faking falls. Coach Bombay chews him out after he fails to fake a fall in their second game but Charlie quits, angrily saying he refuses to cheat in hockey. When Coach comes over to apologize for his behavior, Charlie forgives him and invites him to stay for dinner. This results in Coach taking Charlie under his wing and having several private discussions, mostly about their lives. Charlie attempts to push his single mom and Coach Bombay together but the relationship doesn't last once he leaves for the minor league. Charlie's parents are divorced and he is really protective of her mother. With Gordon's tutelage, he helped him and the Ducks improve and make it to the Pee Wee State Championship where the face their rival Hawks who are undefeated and Bombay's old team. The game was tied in the championship game, Bombay picked Charlie to make the penalty shot. Charlie was reluctant at first, but Gordon tells Charlie that no matter if he wins or loses, he is proud of him. Charlie goes for the penalty shot, and makes it winning the championship game.

In D2, Coach Bombay returns from playing in the minor league and reunites with Charlie who is acting as an apprentice in Hans' hockey shop under Hans' brother Jan. Once Coach Bombay is recruited to coach Team USA, he asks Charlie to round up the remaining Ducks with the help of a duck whistle. He showed skepticism when Hendrix gave the team new jerseys with their logo all over and was surprised when Coach Bombay rebuffed his comments about the team being Ducks and not Team USA for Hendrix. After Adam Banks was injured during the Junior Goodwill Games, he recruited Russ Tyler for the Ducks. Once Adam was able to return right before the last game, he chose to be the bench coach so no one had to give up their spot. His spot was a good investment and Banks owes him. Team USA made it to the finals, with Charlie's coach abilities they won the game and Banks's penalty shot was a success who was the final player of the shootout after they were tied after 3 periods. The Ducks win the Goodwill Games Tournament and went home. He views Gordon Bombay as a surrogate father and grieves when his mentor leaves the team.

He eventually learns how to lead the Ducks as team captain under new coach Ted Orion in D3, and records the game winning assist against the varsity team. While at Eden Hall, he falls for Linda, who he first meets when she asks him to sign a petition to have the mascot of the Warriors changed to something else less offensive. Throughout the film, he tries to change her opinion on jocks, claiming that he's not like the other guys and just wants to play hockey with the Ducks. Linda's petition did come true, when Charlie and his friends made a bet with the Varsity Warriors if they lose Varsity and JV showdown they will leave. If they win, they change the Warriors into the Ducks. The Ducks win the showdown when Goldberg scored a goal on an assist from Charlie and changes the Eden Hall Warriors into Ducks. Eden Hall is now better school thanks to the Ducks.

Charlie is a clumsy player early in the first film, prone to messing up good opportunities to score, which earned him the nickname of "Spaz-way". His playing style slowly improves throughout the film, culminating in him shooting the winning penalty shot in the finals against the Hawks. While his playing style is not shown to have improved in the second film, his loyalty to the team and his knowledge of the game play a more vital role.

For the third film, his playing style is much improved over the first two films, showing him as a more proficient scorer than ever before, but also showing him as a far more arrogant player. Throughout the film, he learns more knowledge about playing defense and being more of a team player. 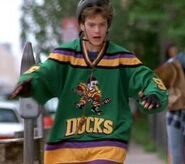