Cassandra, Sam, Lola, Bob, and Max
Carlos Irwin Estévez, best known by his stage name Charlie Sheen, is an American actor, voice actor, and comedian. He is best known for his role as Charlie Harper on the CBS sitcom Two and a Half Men from 2003 to 2011. He also voiced Charlie B. Barkin in All Dogs Go to Heaven 2 (replacing Burt Reynolds).

He is the younger brother of actor/comedian Emilio Estevez, and younger son of actor Martin Sheen.

For Disney, he played Aramis in the 1993 film, The Three Musketeers, Bobby Bishop in Shadow Conspiracy, and Richard "Ditch" Brodie in Terminal Velocity. Additionally, Genie was once seen transforming into the Three Musketeers including Aramis in an Aladdin episode. He was mentioned in The Santa Clause 2.

Genie as Athos, Aramis, and Porthos 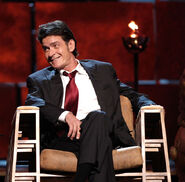 Charlie Sheen speaks at his Comedy Central Roast in September 2011. 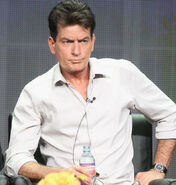 Charlie Sheen speaks at the Anger Management panel at the 2012 Summer TCA Tour. 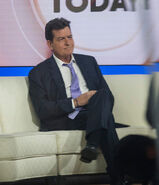 Charlie Sheen visiting The Today Show in November 2015.
Add a photo to this gallery
Retrieved from "https://disney.fandom.com/wiki/Charlie_Sheen?oldid=4221499"
Community content is available under CC-BY-SA unless otherwise noted.