Being dismissed as a dumb jock
Chase Stein is a Marvel Comics character who appears in the Hulu series Runaways, played by Gregg Sulkin. The son of Janet and Victor Stein, he is described as a lacrosse-playing, high school heartthrob. While many write him off as a dumb jock, Chase exhibits flashes of untapped brilliance in engineering, not unlike his wildly successful father’s. When he finds out his parents are supervillains, he joins the team of superhero fugitives known as the Runaways. He fights crime using the X-Ray Specs and the Fistigons, both developed by his parents. The X-Ray Specs give him x-ray vision, and wearing the Fistigons gives him superhuman strength and the ability to shoot electricity and missiles, as well as fire. 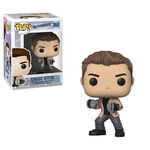 Retrieved from "https://disney.fandom.com/wiki/Chase_Stein?oldid=3492423"
Community content is available under CC-BY-SA unless otherwise noted.