Active
Cheese is a character from the Disney Fairies franchise. He made his debut in the 2008 film, Tinker Bell.

In the original Tinker Bell, Cheese is one of the many mice in Pixie Hollow who serve as helpers of the Tinker-talent fairies. Upon meeting Tinker Bell, he quickly takes a liking to her, and assists her in her attempt to capture sprinting thistles, though it backfires on her and causes much damage to Pixie Hollow. In spite of the destruction, Cheese follows Tinker Bell's plans to make things right in time for the fairies to travel to the Main Land to change the season.

Cheese returns in the sequel to help the fairies prepare for the Autumn Revelry. In the beginning of the film, he assists Tinker Bell in testing her latest invention, the Pixie Dust Express.

Like many other residents in Pixie Hollow, Cheese travels to the mainland for Fairy Camp. When Tinker Bell is captured by humans, he helps her other friends in building a boat. In the end, when the fairies make peace with the humans that held Tink captive, Cheese joined the others during a picnic.

Cheese can be seen participating in some of the Pixie Hollow Game challenges. At one point, he was seen assisting Rosetta and her teammate, Chloe. 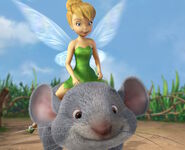