Chernabog (to some degree)

Bald Mountain
Chernabog's minions are the secondary antagonists in the Night on Bald Mountain/Ave Maria sequence of Walt Disney's Fantasia.

Chernabog's minions appear to be quite evil, hostile, and mischievous for their personality. Several of them are shown taking glee in performing acts of debauchery, although it appears they are fearful of Chernabog to an extent, as the black god is not above subjecting his own followers to torment to amuse himself.

Chernabog's worshippers come in lots of different shapes and sizes. Most of the ones seen are ethereal cloaked specters or phantoms with bright glowing eyes. But there are witches flying on broomsticks and skeletal horsemen among them, as well as varieties of disfigured criminals, fallen warriors, fiery satyrs, harpies, small imps, and dragonlike demons. Most horsemen ride atop the backs of skeletal steeds, but others are seen riding atop the backs of other creatures - such as goats, boars, and even a cow. A combination of skeletal dogs or wolves, black cats, and swarms of bats are also among them.

During the "Night on Bald Mountain" sequence from Fantasia, Chernabog summons numerous ghosts, demons, and monsters from the graveyard of the village which Bald Mountain overlooks. They seemingly represent the pagan religions interpreting them as evil. Being summoned by him, they transformed into animals for Chernabog's delight as he throws them into the fire. With his own powers, he reveals that they are as disposable as they look, burning them in his own hellish flames. They, like Chernabog, are vanquished when the morning arrives.

The scene from "Night on Bald Mountain" is represented as Chernabog sends his army of demons to ruin Mickey Mouse's imagination under the orders of the Evil Queen. We see the face of a skull, a witch, and many other phantoms. They were destroyed in the final battle between Maleficent and Mickey Mouse, restoring the powers of Light.

One of the phantoms riding a demonic horse makes a cameo appearance as the Horned King in one of Hen Wen's visions.

In the episode "Touchdown and Out", Chernabog's minions appear as spectators in Chernabog's hellish stadium during the football game. 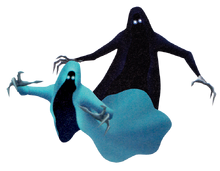 Two demons appear in the game at Bald Mountain near their master Chernabog.

The ghosts are seen flying in the skies outside of the Haunted Mansion in the Lonesome Manor.

The demons appear in the two Night on Bald Mountain-themed transition levels.

The Disney Wiki has a collection of images and media related to Chernabog's Minions.