The Cheshire Cat from "Alice's Adventures in Wonderland"
Lucifer

“You may have noticed that I'm not all there myself.”
―Cheshire Cat

The Cheshire Cat is a mysterious pink and purple striped cat with a devious, mischievous personality in the 1951 Disney animated feature film Alice in Wonderland. He was voiced by Sterling Holloway in the original film.

The Cheshire Cat has a permanent smile on his face and can disappear at will. The cat is a very odd being able to reshape his body to either amuse or frighten his visitors. He's very mysterious, and in his own way, very dark. Like all members of Wonderland, the Cheshire Cat is mad, but unlike the others, he admits it with pride. All of Wonderland's inhabitants appear to hold a fear over the Cheshire Cat, even the Queen of Hearts, most likely due to the fact that he is the maddest and craziest of them all, or it could be due to his unique abilities.

His true nature in the film is highly questionable, but above all, he appears to be a completely neutral character. In many instances, he's the only being in Wonderland to show kindness and sympathy towards Alice, giving her advice on which path to take during her journey, practically acting as her wise guide to the point where she's overly joyous to see him once he returns. However, as seen during the meeting with the Queen of Hearts, the cat has a cruel sense of humor, constantly causing mishaps to purposely have the Queen's dangerous temper target Alice. This behavior carries out up into the climax, though it can be slimly argued that he caused the Queen's temper to violently erupt for the last time to assist Alice in getting home, as the climactic chase throughout Wonderland eventually leads to her awakening, as it was all just a dream, which would mean he knows everything that is happening around Alice and possibly what's going to happen ahead of time.

After a gamete of nonsensical events in a pursuit of the White Rabbit, Alice enters the Tulgey Woods. There, the Cheshire Cat arrives offering her help with directions. She tries to receive practical answers, but the cat continues to goof off by asking random questions, and continually showcasing his abilities. After a while, he advises her to seek answers from the Mad Hatter and the March Hare. Alice, not wanting to associate with mad people, denies the advice, but the cat claims that everyone in Wonderland is mad, including himself. He then slowly fades away into thin air, laughing and singing in the process.

Later on, Alice finds the trail of the White Rabbit once again, and begins to pursue him once more. She is lost again, but this time, all hope seems lost. She breaks down in tears, just when the Cheshire Cat arrives. Delighted to see him, Alice claims that she's no longer looking for rabbits, and wants to find her way home. However, Cheshire Cat explains that in Wonderland, she has no way, and that all ways there are the queen's ways. Confused, Alice informs him that she knows nothing about the queen, so Cheshire reveals a secret passage way to her card-inhabited kingdom.

During a croquet game with the Queen of Hearts, Cheshire Cat arrives and continuously gets Alice into trouble with her majesty. At one point, Cheshire Cat causes the queen to flip over, revealing her bloomers. Out of utter embarrassment, the Queen puts Alice on trial. With the witnesses being the Mad Hater, March Hare, and the Doormouse, the trial gets nowhere. Soon enough, the Queen of Hearts sentences Alice with death by beheading, until she finds more mushrooms in her pocket, which causes her to grow to a gigantic size. She then takes advantage of the opportunity and insults the queen, but she shrinks down to her normal size once again. The Cheshire Cat appears once more, repeating Alice's insults which causes the Queen to lose her temper, and this leads to the climactic chase.

In "The Stolen Cartoons", when Donald Duck proved to be a terrible host, Cheshire Cat vanished from the club. In "Big Bad Wolf Daddy", the Cheshire Cat was blown away leaving only his grin behind during the wolf's performance. In "Ask Von Drake", he was seen atop the Queen of Hearts' crown during The Ludwig Von Drake Song. In "Unplugged Club", when Pete took out the club's battery, only the Cheshire Cat's eyes and grin showed in the darkness. In "Super Goof", the Cheshire Cat could be seen atop the March Hare's chair with the Mad Hatter pouring tea on the Hare. In various episodes such as "Mickey and Minnie's Big Vacation", he could be seen clapping in a crowd with other characters when a cartoon has ended.

In the animated short Electric Holiday, Cheshire Cat was one of the many Disney character guests to attend Minnie Mouse's fashion show.

The Cheshire Cat was a supporting character in the 1995 series. The Cat loves to play all manner of practical jokes on the Wonderlanders, but even he occasionally performs some act of kindness.

Originally a friend of Alice, the Cat appears many years later when Alice returns to Wonderland, now wild, ferocious and apparently loyal to The Red Queen, in addition to being a cat of a monstrous size.

Cheshire encounters his "old friend" in Tulgey Wood and attempts to eat her due to a lack of food within the woods. However, he is distracted by the Knave of Hearts and accidentally swallows a mushroom, causing him to shrink to the size of a house cat, prompting him to flee.

In the Alice in Wonderland stage, the grin of the Cheshire Cat appears in the maze as the player seeks out Alice's missing head. 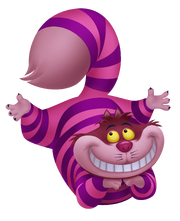 The Cheshire Cat appears in several games of the Kingdom Hearts series, although most of them are minor as they take place in his world, Wonderland. However, in Kingdom Hearts, his intentions appear to be ambiguous as he appears as either an ally or an enemy; he helps Sora during his visit to Wonderland, but also summons Heartless against the group, although it appears he simply wants to test Sora towards these obstacles.

The Cheshire Cat briefly appears during the Alice in Wonderland mini-game during the player's free fall down the rabbit hole.

In the game, the Cheshire Cat is one of the many Disney characters kidnapped and taken to the Wasteland world of illusion, where an evil witch named Mizrabel plans to steal the essence of famous Disney characters to gain access to their world and dominating it. After Alice (who was also kidnaped) is rescued, she gives Mickey Mouse (the hero of the story) the quest to find the Mad Hatter and Cheshire.

The Cheshire Cat is usually seen only in parades in the Walt Disney Parks and Resorts. In the past, he had appeared as a walk-around character as well.

In 2013, as part or the Disney Dreamers Everywhere! events, Cheshire Cat returned as a meet-and-greet character at Disneyland Paris.

Cheshire Cat appears in audio-animatronic form in the dark ride based off the film in the Tulgey Wood scene.

He also appeared in the ride's finale as a giant head just before the Mad Tea Party scene, but was removed from that scene during the ride's 2014 refurbishment.

Cheshire Cat appears in the bubble montage in the live show at Disney's Hollywood Studios.

Retrieved from "https://disney.fandom.com/wiki/Cheshire_Cat?oldid=1661807"
Community content is available under CC-BY-SA unless otherwise noted.