This article is about the 2010 live-action character. For the 1951 animated character, see Cheshire Cat.

Alice in Wonderland (2010)
Alice Through the Looking Glass

“I never get involved in politics.”
―Chessur about avoiding discussions[src]

Chessur is a major character in the 2010 film Alice in Wonderland and a supporting character in its sequel Alice Through the Looking Glass. He is a cheshire cat with evaporating and shapeshifting skills, a sarcastic and slightly dark personality, and a stealthy attitude.

Chessur is a Cheshire cat who possesses the ability to freely appear and disappear. He is always calm, with a seductive grin. It is his disembodied head that first appears to Alice Kingsleigh in the Tulgey Wood after she's been attacked by the vicious Bandersnatch. He offers to purify the gashes on her arm by licking them. Alice declines, although she allows him to lead her to Thackery, Mally and Tarrant's tea party. However, the Hatter is not happy to see him because he blames Chessur for deserting them on the day the Red Queen seized control of Underland. Using his skills and the Hatter's coveted top hat, the Cheshire Cat later finds a way to redeem himself.

Chessur is a witty, sometimes smug and sarcastic, cheshire cat with a slightly dark, grim and creepy personality, and a stealthy attitude. He is also slightly coward: When a situation turns bad or dangerous, he has the habit of evaporating away. That personality trait, in particular, created a rift between him and Tarrant. However, it also should be noted that Chessur can be compassionate and helpful if he wants to. He helped Alice many times and even saved Tarrant's life by shapeshifting into him once.

Chessur's skills of evaporating, floating and shapeshifting are his most well-known characteristics. He is able to completely dissolve his body, or just a part of it, when he wants to. Indeed, one of his most common poses is making just his head appear, like there is no body, or making just his eyes and teeth appear, like there is no head. He is also able to freely float in the air, a skill he is particularly fond of given that he uses it almost every time and everywhere. Even when there is no need to float, like when he is close to a chair or a bench, Chessur prefers to do it instead of sitting. Last but not least, he has the ability to shapeshift his body to any form he wants to, no matter the size of his new shape. This was very utile, for example, when he saved the life of Tarrant Hightopp in Salazen Grum by shapeshifting into him, even being able to create his clothes and perfectly imitating his walk.

After Alice gets lost in the forest because of the Bandersnatch attack, Chessur finds her and offers to purify the claw marks on her arm, but she declines, allowing him to just wrap it with a piece of cloth. He then helps Alice by guiding her to Tarrant, Mally and Thackery's tea party. Tarrant is not happy to see him, accusing him of betraying them by evaporating away during the attack of Witzend during the Horunvendush Day (the day the Red Queen took control of Underland using the Jabberwocky). Chessur denies that the tragedy caused by the Jabberwocky was his fault, but he is yelled at and insulted by the Hatter, until Mally intervenes. When the the Knave of Hearts, Bayard, and the Armoured Cards approach, he evaporates away. Later on, he helps Tarrant during his execution by sparing his life, taking his place while wearing the Mad Hatter's hat and vanishing before he is executed. Although he had always wanted Tarrant's hat, he appears later in the White Queen's Castle and returns it to its owner. He is later seen in the Frabjous Day, witnessing the final battle between Alice and the Jabberwocky. He is last seen grinning at Alice before she drinks the Jabberwocky blood to return to London.

Chessur returns in this sequel.

Chessur appears in the video game adaptations of the film. He is a playable character in all the three versions of the game, the Wii, PC and DS. His main ability is invisibility, in which he makes targeted objects hidden or reveals invisible objects. Stephen Fry reprises his role from the film. 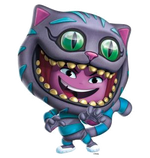 Chessur appears as a costume in Disney Universe. His costume is automatically unlocked and purchased right at the very start of the game, so it can be worn by the players immediately upon the beginning of the gameplay. That also makes him the first costume to be unlocked in the Alice in Wonderland pack. When using the Chessur costume, players can use mushrooms to strike enemies. He begins with a brown mushroom and changes to a blue mushroom upon upgrade. After a subsequent upgrade, he fights with a fiddlehead fern. Finally, when fully upgraded, he uses a red mushroom with white spots.

Chessur makes a cameo in Disney Infinity 3.0, appearing in Alice's combo finisher. He can suck enemies in her range and blast them away.

Chessur appears in the attraction Alice in Wonderland Maze in Shanghai Disneyland, China. Guests are able to find him in the maze if they choose the right path, and then witness him floating before their eyes, then disappearing in clouds of smoke—all while he offers amusing advice.

“I'll take you to the Hare and the Hatter, but that's the end of it.”
―Chessur after finding Alice in the forest

Chessur and Tarrant relationship was shattered on the Horunvendush Day (the day the Red Queen took control of Underland using the Jabberwocky), due to Chessur evaporating away from the destruction of Witzend and thus not helping Tarrant's family, the Hightopps, resulting in their supposed death. Chessur maintained that his actions were not responsible for the demise of the Hightopps, as the only ones to blame were the Red Queen and the Jabberwocky themselves, but Tarrant took a hard time in accepting this. Eventually, however, they were able to make amends when Chessur saved Tarrant's life in Salazen Grum by shapeshifting into him, thus avoiding the real Tarrant of being beheaded. 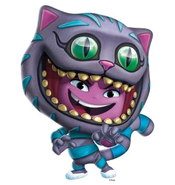 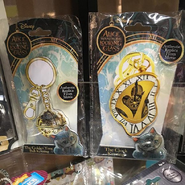 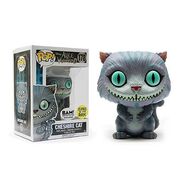 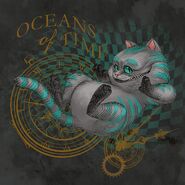 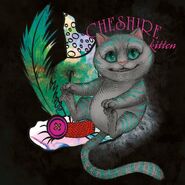 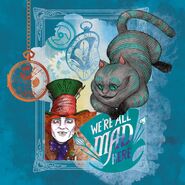