Power, himself, his mother, surprises

Women thinking they're equal to him (namely Mulan), anyone mentioning his mother, not getting his way, the Huns, invasions, humiliation, being told he squeals like a little girl

Loses his council position and faints for it

"You will do well to teach your daughter to hold her tongue in a man's presence."
"Insubordinate ruffians. YOU MEN OWE ME A NEW PAIR OF SLIPPERS! And I do not squeal like a girl."
Chi-Fu is an antagonist in Disney's 1998 animated feature film Mulan.

Chi-Fu is the pompous, elitist advisor to the Emperor, who doesn't think much of him, offering Mulan Chi-Fu's position without a second thought and showing amusement when he faints in shock. He also believes that women and girls are inherently inferior to men and boys—a belief that persists even after Mulan saves China; ironically, he possesses a very girlish scream, which was shown when a panda ate his slipper.Despite this, he doesn't appear to be very fond of the soldiers, either, as when he says they're unfit to be soldiers, he says "those BOYS" with disgust and disdain. He also doesn't seem to even care when conscripting soldiers whether or not they have something that would render them ineligible to serve in combat, as evidenced by giving a conscription notice to the elderly Fa Zhou, even after Mulan tried to protest the decision and cited an injury her father suffered in the past that was strongly implied to prevent him from doing even basic training as a reason not to conscript him. He also belittles Shang, voicing the opinion that Shang only received his position through family ties (a not unreasonable assumption, seeing as his father was the General of the army who gave him the position of captain). Despite his self-inflated belief of himself, he is very whiny and cowardly. He hates Mulan because she dared to defy her role as a woman, continuing to criticize her despite her heroism. Because of his pompous attitude, he is often teased by the soldiers (ex. In the song "A Girl Worth Fighting For", when he sings "I got a girl back home who's unlike any other", Yao sings back with "Yeah, the only girl who'd love him is his mother").

Despite his negative behavior, he does show a positive trait in being industrious and loyal to the Emperor, as when the Emperor ordered the distribution of conscription notices to all of China, Chi-Fu went as far as to distribute them himself.

Chi-Fu first appears when General Li arrives to inform the Emperor of the Hun invasion, of which Chi-Fu expresses disbelief, citing the strength of the Great Wall. However, the Emperor takes the threat seriously and tasks Chi-Fu with distributing conscription notices to all of China. The notices require one man from every family to serve in the Imperial Army.

During this task, Chi-Fu comes to Mulan's village and announces the Emperor's orders. He is insulted when Mulan pleads with him to spare her father, citing Fa Zhou's previous war service. Here is where he first reveals his sexism, telling Fa Zhou to teach his daughter silence in the presence of men, not even dignifying her with a reply to her face. After ordering Fa Zhou to report for basic training in the morning, he continues to conscript the rest of the villagers.

The next day, Chi-Fu is seen with General Li at the military camp. He is dismayed to learn that General Li has promoted Li Shang to Captain, putting Shang in charge of training the new recruits, believing Li Shang is too inexperienced and irritated that he only got the promotion simply because he is General Li's son. Chi-Fu is charged with observing the training and, when the recruits are ready, to allow them to report to General Li with the rest of the army. Though the recruits technically complete their training after some time, Chi Fu points out to Li (with relative validity) that this does not make them soldiers, having written a scathing report on their performance. Chi-Fu then goes to bathe but quickly leaves after being bullied by the army men. Mushu, disguised as an army messenger, delivers him a forged message, which has "orders" that Shang's troops are needed at the war front.

Chi-Fu is next seen during the "Girl Worth Fighting For" song sequence, citing his own girl back home (his mother), which brings much mocking from the troops. He hides for most of the Hun battle (because of not being a soldier) after Mushu accidentally fired a cannon causing their position to be given away to Shan Yu and the Huns, but is next seen discovering Mulan's identity as a woman. He reveals the news to the troops and cites the law which states that Mulan must be executed (as women are forbidden to join the army), and also stops Khan, Yao, Ling, and Chien Po from halting the execution. However, much to Chi-Fu's surprise, Shang spares Mulan's life, as he owes Mulan a debt from when she saved his life during the battle. Chi-Fu attempts to argue the matter and begs to execute Mulan, but gives in when Shang refuses to execute her and orders the army to move out.

Chi-Fu returns to the Imperial City, alongside the army, to a hero's welcome. He is shown to be the only one who is truly happy, however, as the rest of the platoon is upset about losing Mulan because of what Chi-Fu did to her. Chi-Fu disappears for most of the final battle against the Huns. He reappears after Mulan defeats Shan Yu, angered at his official's hat being burned by the fireworks, citing it as a deliberate attempt on his life. When Shang defends her, noting that Mulan is a hero, Chi-Fu dismisses the thought by arrogantly stating his belief that as a woman, Mulan will never be worth anything. Shang angrily prepares to assault Chi-Fu, but is stopped by the Emperor. When the Emperor begins to list the faults Mulan has committed, Chi-Fu then shows a grin, which turns to a look of shock when the Emperor instead honors Mulan by bowing to her. He is the first to follow the Emperor's example by throwing himself down to kow-tow (an Eastern bowing position that consists of kneeling with one's face and palms to the floor). When the Emperor offers Mulan a council position, Chi-Fu attempts to downplay the offer, citing that there are no open council positions, but faints when the Emperor offers Chi-Fu's own council position. However, Mulan declines the offer, leaving Chi-Fu's fate unknown.

He is not seen again for the rest of the film. But since he doesn't appear in the sequel, he may have possibly resigned from his post in disgrace and then isolated himself in shame for his actions against Mulan.

Chi-Fu appears briefly in the House of Mouse episode "House of Genius".

"You will do well to teach your daughter to hold her tongue in a man's presence."

"Those boys are no more fit to be soldiers than you are to be captain!" 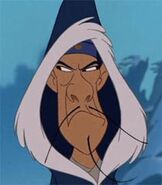 Chi-Fu showing Shang what happened to the General's army.

Chi-Fu fights bravely against the Huns
Mulan-disneyscreencaps com-7089.jpg
"I knew there was something wrong with you... A woman!"

"That was a deliberate attempt on my life!"

Chi-Fu kneels down to Mulan after seeing the Emperor bow to her.

"There are no council positions open, Your Majesty."
Mulan-disneyscreencaps.com-9116.jpg
Chifu's defeat

Retrieved from "https://disney.fandom.com/wiki/Chi-Fu?oldid=3246520"
Community content is available under CC-BY-SA unless otherwise noted.