1986–present
Chiara Zanni is a Canadian comedian, actress, voice actress, and singer. As an actress, Zanni is known for playing, Amy Ryan, the titular character in the 2007 television series About a Girl for The N, as well as for her previous role as Maggie Buckman on CBC's adult drama Edgemont (2001–2005).

As a voice actress, Zanni is known for performances, such as Bionicle: Mask of Light as Hahli, playing the title role in Hamtaro and Stellaluna, Jubilee in X-Men: Evolution, Bon Bon in My Little Pony Tales, and Nori, the mermaid in Barbie: Mermaidia. She is currently working on various animated series, including, Storm Hawks, Ricky Sprocket, and Sushi Pack.

Zanni was born in Vancouver, British Columbia, to an Italian father and a British mother. Chiara started her career at the age of eight, when she was cast as the "Pokey Little Puppy" in a cartoon called Little Golden Bookland and hasn't stopped working since. Chiara has acted in feature films X-Men, 40 Days and 40 Nights, Come l'America, In the Land of Women, and Good Luck Chuck. 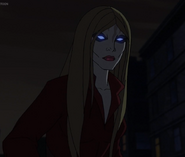 Cobby Hugglemonster
(Henry Hugglemonster)
Add a photo to this gallery
Retrieved from "https://disney.fandom.com/wiki/Chiara_Zanni?oldid=3763592"
Community content is available under CC-BY-SA unless otherwise noted.