The ocean (formerly), the loss of his family or people, Moana's stubbornness

"Motunui is paradise! Who would want to go anywhere else?
"No one goes beyond the reef".
"It suits you".
Tui is a character in the Disney animated feature film Moana. He is the father of Moana and the Chief of Motunui.

Chief Tui is a fictional character in the Disney movie Moana taken from a real life Chief from Samoa named Tui that lives in Hawaii and performs the Siva Afi or "Fire Knife Dance." Disney modeled this character after him and created a story for the movie. The original Chief Tui can be found at www.Chieftui.com

The Disney character Tui is the chief of the people on the island of Motunui, having succeeded his father. He is aquaphobic to the point of prohibiting his family and villagers from venturing beyond the island’s outer reef, though the reasons behind such law enforcement are rarely discussed. In the days of his youth, Tui and his best friend took a boat out into the ocean in the middle of the night. During their sail, they were struck by rough seas that destroyed their vessel. Tui's friend drowned into the dark depths of the ocean, and the former has forever feared (in his heartbreak) that the same fate may claim his people should they journey beyond the sanctity of their island's barrier reef.

Despite his concern towards Moana's love for the sea, Tui sees greatness in his daughter; he pressures her to follow his footsteps by becoming chief once his time as ruler comes to an end, having held this dream close to his heart since the day of Moana's birth.

Chief Tui is the gregarious and well-respected leader of the people of Motunui Island. Chief Tui wants Moana to follow in his footsteps as leader of their people, but fears his daughter’s draw to the ocean and the world that lies beyond their reef.[1]

Early in her youth, Moana was drawn to the sea, and the ancient legends told by her grandmother (and Tui's mother) Tala. Tala believed an ancient curse was slowly consuming the world, meaning someone would have to venture passed the reef to save the island. Tui believed otherwise, and was open about his opinion on the matter. He also believed the idea of leaving Motunui to be a foolish one, as he viewed his village as nothing short of paradise. Nevertheless, Moana still found herself attracted to the open ocean, which only drove Tui and his wife Sina to spend years breaking her out of the apparent phase. By the time Moana was teenaged, Tui felt comfortable with taking her to a sacred part of the island, where chiefs of the past place their rock to solidify the start of their eras. With Moana next in line to serve as chief, Tui expresses excitement in having his daughter follow in his footsteps, but stresses that Moana must forget her love for exploration to properly focus on the welfare of her people and family.

Moana willingly agrees, and she works alongside her father and mother as leaders of the village. She proves to be successful, with Tui having so much trust and pride that he allows her to singlehandedly solve some of the issues throughout the community. At one point, however, the food supply in the island begins to die down, including the fish. With every idea to fix the problem having been executed and met with failure, Moana suggests her people sail beyond the reef to find fish elsewhere. This angers Tui immensely, who reminds his people that no one is to leave the island. Moana argues against him, which only angers her father further. Tui gruffly reiterates his longstanding law, and leaves the scene before his temper worsens. With Moana failing to understand her father's actions, Sina steps in to explain the accident that killed Tui's best friend years ago.

Later that night, Tui and Sina gathered with the villagers to discuss the crises of their dwindling food supply. Moana suddenly arrives and claims to have a solution, which rests on the legendary heart of Te Fiti. Moana shows her people the stone and tells them they were once voyagers with the ships of their ancestors still in their possessions, albeit hidden away in a secret cave. This infuriates Tui, who regrets not destroying the hidden boats years ago when he had the chance. He grabs a torch and heads to the hidden cave to do just that, though Moana tries to stop him and shows him the heart. Tui discards it as nothing but a rock, and as Moana scurries to recover it, she finds Tala's cane on the ground.

Tui and Moana are informed that Tala is in critical condition, and rush to her deathbed to oversee the problem. According to the medics, there is no foreseeable cure for Tala's failing health, and Tui mournfully remains by his mother's bedside as she passes away. Meanwhile, Moana leaves her home to fulfill her grandmother's dying wish of returning the heart of Te Fiti to save her people. During her voyage, Tui briefly returns in a nightmare in which he and Sina are killed by the growing darkness consuming their island.

Back in reality, Tui and Sina continue to overlook the dying crops. Suddenly, they begin to heal and grow as fresh as can be. The island appears to be saved, and just as this occurs, Moana returns from her voyage. Tui and Sina run to greet their daughter, and although the latter admits to having journeyed passed the reef, her father can only smile and accept her passion for voyaging. From there, Moana becomes the new Chief of Motunui, and reinvigorates her island's wayfinding roots. With her father supporting the abolishment of his law, Moana takes her people to the seas and teaches them the ways of sailing as a master wayfinder. Tui is among them, taking in his daughter's wisdom as a new era for Motunui begins.

An emoticon version of Tui appeared in the As Told by Emoji retelling of Moana. 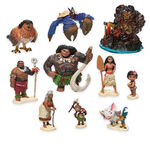 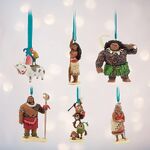 Young Tui with his bestfriend

Tui and Sina welcome their daughter as she returns from her journey.
Add a photo to this gallery

Retrieved from "https://disney.fandom.com/wiki/Chief_Tui?oldid=2625382"
Community content is available under CC-BY-SA unless otherwise noted.