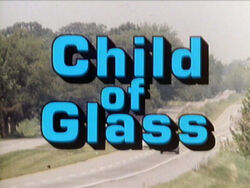 Child of Glass is a TV movie based upon a novel by Richard Peck (The Ghost Belonged to Me). Child of Glass was updated to the present when it was created for Disney's TV series in 1978 and originally aired on NBC. The movie was also re-aired sporadically during the early to mid-1980s, often on weekends during the afternoon. The filming locations were in Danville, Kentucky and New Orleans, Louisiana. On December 6, 2011, Child of Glass was re-released on DVD by Walt Disney Studios as part of the (Generations Collection) http://disneydvd.disney.go.com/child-of-glass.html.

Alexander Armsworth and his family move into a spooky old Louisiana mansion that was once the home of a notorious river pirate. Before long, Alexander catches sight of a mysterious little girl and her dog, both of whom turn out to be ghosts. The little girl ghost tells Alexander that her name is Inez Dumaine, a Creole girl who lived in the 19th century, and appeals to him for help in finding a child of glass.

With the aid of his new friend, Blossom, Alexander finds out that his family's mansion was formerly owned by Jacques Dumaine, a river pirate, the evil uncle of Inez. During her life, Inez refused to tell the location of the treasure he sought; for good measure, he placed a curse upon her that has caused her to roam the plantation after death, but cannot leave the mansion's property lines. Although a spirit, Inez briefly gains corporeal form in order to be Alexander's date when his parents throw an elaborate antebellum dance in honor of their mansion. With only a few days left before the curse becomes permanent, Alexander and Blossom rush to find the child of glass and free Inez's spirit.

Alexander and Blossom's major clue in solving the mystery involved the following poem: "Sleeping lies the murdered lass, vainly cries the child of glass. When the two shall be as one, the spirit's journey will be done."

Disney released a DVD-on-Demand version of this film as part of their "Disney Generations Collection" line of DVDs on December 5, 2011.

Retrieved from "https://disney.fandom.com/wiki/Child_of_Glass?oldid=3743205"
Community content is available under CC-BY-SA unless otherwise noted.