2005-present
China Anne McClain is an American actress, voice actress, and singer-songwriter. She first gained recognition for her role as Charlotte McKenzie in the 2010 comedy Grown Ups and its 2013 sequel.

For Disney, she played Chyna Parks in the Disney Channel Original Series A.N.T. Farm from 2011 to 2014. She also played Isabel in the Hannah Montana episode "Welcome to the Bungle", Kiara Tyshanna in the Jonas L.A. episode "The Secret", Tina in the Wizards of Waverly Place episode "Wizards vs. Angels", and guest starred as herself in the PrankStars episode "Game Showed Up". McClain has a lead role in the Disney Channel Original Movie, How to Build a Better Boy. She and her sisters, Sierra and Lauryn, are also known for forming the group, McClain Sisters. Additionally, she played Uma in Descendants 2, Descendants 3, and Descendants: The Royal Wedding, where she had previously voiced Freddie Facilier in the first season of Descendants: Wicked World. She also played Sheena in K.C. Undercover. 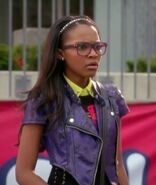 Gabby Harrison
(How to Build a Better Boy)

China Anne McClain at premiere of Descendants 2 in July 2017.