Chip 'n' Dale: Park Life is a French-American animated web television series co-produced by The Walt Disney Company France and Xilam Animation. The series has 12 episodes comprised of 36 seven-minute segments and is non-verbal.[2]

Combining classic-style cartoon comedy with contemporary storytelling, the series follows two tiny wisecracking troublemakers trying to live the good life in a big city park while having giant-sized, sky-high adventures. Disney’s beloved chipmunks, optimistic but nervous worrier Chip and laid-back dreamer Dale, make the perfect odd couple. They’re best buddies and they drive each other nuts! In their perpetual pursuit of acorns, these ultimate underdogs are joined by Pluto, Butch and other iconic Disney characters as they face down bullies great and small.

Pluto's Quin-puplets and a Beagle Boy in "Thou Shalt Nut Steal".

Chip, Dale, Pluto and his quin-puplets in "Thou Shalt Nut Steal".

Clarice as she appears in "Night of the Pizza Moon".

Donald Duck as he appears in "Dark in the Park". 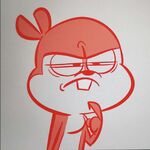 Chip and Dale about to cry.