Chip 'n Dale Rescue Rangers is an American animated series produced by Walt Disney Television Animation and created by Tad Stones and Alan Zaslove. The series aired a preview episode on August 27, 1988 and then premiered on the Disney Channel on March 4, 1989. It technically premiered with a two-hour movie, Rescue Rangers: To the Rescue, which was later broken up into a five-part pilot and aired as the opening of the second season.

The show's theme song (words and music) were written by pop music songwriter Mark Mueller, who also wrote the theme song for DuckTales and produced by Alf Clausen. Both songs were performed by Jeff Pescetto.

The series premiered in syndication in the fall of 1989. In 1990, it became a part of the Disney Afternoon line-up, where it aired until the fall of 1993. It has been credited with also setting up the Disney Renaissance era alongside several other animated series at the time.

Chip and Dale, two chipmunks with a nose for trouble, started a detective agency, the Rescue Rangers, along with their friends Gadget, Monterey Jack, and Zipper. The pint-sized detectives deal with crimes that are often "too small" for the police to handle, usually with other animals as their clients. The gang frequently finds itself going up against two particular arch-villains: Mafia-style tabby cat Fat Cat and mad scientist Norton Nimnul. They always think of everyone and whenever someone is in trouble, they are on the case, the gang have hearts of gold and always help others in need and they would never steal anything.

The series primarily takes place in a city (which is presumably New York City due to the presence of the Chrysler Building in "The Carpetsnaggers" and the Twin Towers in "Robocat") and the Rescue Rangers themselves reside inside of a tree located in a large park in the middle of the city. However, many episodes also take the Rescue Rangers to many different and exotic parts of the world and occasionally to outer space.

Unlike the other cartoons that aired during the Disney Afternoon, the world of the Rescue Rangers is mainly dominated by humans while animals are less anthropomorphic. Animals within the world of Rescue Rangers normally cannot speak or be understood by humans and their behavior and appearance tends to vary greatly, with some actually being somewhat anthropomorphic to the point where they dress and act like humans while others are less intelligent or incapable of properly speaking to their fellow animals and may even act like animals in the real world. In the episode "Bearing Up Baby", the Rescue Rangers acknowledge this fact and even referred to such wild animals as 'uncivilized animals'. In the episode "Dirty Rotten Diapers", the Rescue Rangers refer to the 'language' that mice and chipmunks speak as 'mouse-ese' and 'chipmunk' respectively, showing that animals mainly speak through the noises that they make and can understand one another despite how different their form of communication sounds amongst each species. However in the episode "A Fly in the Ointment", shows that if a human somehow becomes part animal they'll instantly be able to hear animals speak as if they were humans, showing that the sounds animals make can actually be heard as regular speak through the ears of other animals. Humans, however, can understand animals under the right conditions, usually with the aid of magic or technology as shown by the likes of Winifred and Professor Norton Nimnul. A few rare animals have been shown to be capable of actually speaking to humans without any aid, as shown by Butch the Bulldog and Sewernose de Bergerac. Aliens, robots, and the undead have also displayed the ability to understand and speak with animals.

During the show's run, no anthropomorphic ducks, dogs, pigs, etc. like the ones seen in DuckTales, Darkwing Duck, or TaleSpin ever appeared within the series, which likely put Rescue Rangers in a separate reality of its own, and even in one episode Dale mentioned a cartoon "with that big dumb duck". However, the comic The Legend of the Chaos God seems to imply that Chip 'n Dale Rescue Rangers takes place within the same reality as the other Disney Afternoon shows despite the dominant human population of its setting (much like how Quack Pack would later depict Duckburg with a mostly human population after DuckTales had depicted it with an anthropomorphic animal population).

When Tad Stones first came up with the idea of the Rescue Rangers series, Chip and Dale were not part of the show. In the original idea, the show would center around a team of animals, which included a chameleon, an earlier draft of Gadget, and Monterey Jack (with a different name). The main character, though, was an Indiana Jones type mouse named Kit Colby who sported a fedora and a fluffy collared leather jacket. When he proposed the show in a meeting with Michael Eisner and Jeffrey Katzenberg, the idea was well received except for the character of Kit Colby. At Eisner's suggestion, he was replaced with the chipmunk duo to give the show some established Disney characters to work with.

While Chip and Dale were established characters, to bring them into the series, only their general appearance and broad personality traits were kept. Unlike their appearances in Disney shorts, in the Rescue Rangers the chipmunk duo are very verbal, with Chip voiced by Tress MacNeille and Dale voiced by Corey Burton. Audio processing was used to speed-up the voice recordings and give the voices a higher pitch, particularly Chip's. The pair were given clothes -- Chip the clothing of the original concept Kit, while the goofier Dale, incidentally modeled after Magnum, P.I., with his Hawaiian shirt.

The show's opening theme was performed by the pop group The Jets. It was written by Mark Mueller, an ASCAP award-winning pop music songwriter who also wrote the theme song to DuckTales.

Except for the five-part set of episodes made from the pilot movie, each 22-minute episode of the series was self-contained. Plot points introduced in each episode stayed in the episode and any character development did not appear to continue through to future episodes. Most of the episodes followed a similar format, where in the next case was presented at the start of the episode, then the bulk of the episode had the sleuths gathering clues and investigating the situation. In the last few minutes of the episode, the case was resolved, usually in dramatic fashion and the final moments would have a humorous wrap-up scene between the Rangers.

In fall of 1989, McDonald's produced a series of Chip 'n Dale Rescue Rangers themed Happy Meal that included toy versions of the main characters riding small vehicles. Scenes from series were incorporated into the TV commercials advertising the Happy Meals.

On January 31, 2014, Walt Disney Pictures announced that an upcoming live-action film based on the series is in early development and will tell the origins of the Chip, Dale, and the Rescue Rangers. The film is still in early stages of development and a predicted release date is currently unknown.[1] 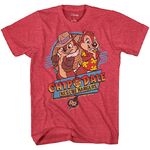 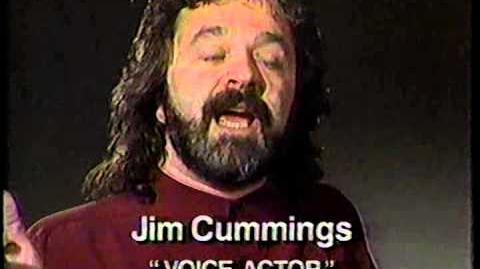