Disney Wiki
Register
Don't have an account?
Sign In
Advertisement
in: Character groups, Characters, The Avengers characters,
and 22 more

The Chitauri are a military alien race that appear as antagonists in the Marvel Cinematic Universe, debuting in the 2012 film The Avengers. They are part of Thanos' army.

The Chitauri were created by Mark Millar, Paul Neary and Bryan Hitch.

The Chitauri are a powerful, technologically-advanced race of extraterrestrial cyborg-like creatures, and they serve Thanos. They were trapped for eons in the dead space between dimensions. The Chitauri have waited, planning and building for the day their ruler would lead them back into the world of light and life. When the Mad Titan allies himself with the mind-controlled exiled Asgardian Loki, the Chitauri are granted to him as his personal army to conquer Earth and gain the Tesseract.

Once gained the Tesseract from S.H.I.E.L.D., Loki is able to open a portal to the Chitauri's world, thanks to the help of a brainwashed Erik Selvig. The Chitauri immediately start to wreak havoc and destruction on New York, destroying buildings and attacking civilians in the streets. They quickly established superiority in the city before any significant military force can respond. Soon after their arrival, The Avengers appear, and a major battle begins.

Not expecting such resistance, the Chitauri are initially overwhelmed, but soon their numbers increase so much from the portal that the superheroes find some difficulties in containing them. Captain America takes command of the Avengers as well as the local police forces, and thanks to his command, the Avengers' powers are properly used as well as displayed while they face the menace. Hawkeye positions himself on top of a building and takes out several Chitauri flyers, Thor bottlenecks the Chitauri's advance using lightning storms, the Hulk smashes Levithians, Iron Man focuses on establishing general air superiority, and Captain America and Black Widow fight off numerous Chitauri infantry on the bridge. SWAT teams and patrol officers also fall back and hold Thirty Ninth Street against a Chitauri platoon, stalling the Chitauri advance and allowing civilians to escape.

Eventually, the World Security Council decides to blow up Manhattan with a tactical nuclear weapon in order to contain the Chitauri's invasion at the cost of the civilians' lives as collateral damage there, much to Nick Fury's chargin. Despite Fury's attempts to stop it, a rogue S.H.I.E.L.D. harrier under orders from the Security Council launches off the carrier and fires a small nuclear missile at the city. Iron Man chooses to bravely intercept the missile and dispose of it. Stark manages to intercept the missile and throw it through the portal, where it blows up Chitauri's fleet, including their Mother Ship, without sacrificing Manhattan to do so. This evidently cuts the link off from the aliens' collective minds and kills all the Chitauri in the immediate vicinity on the other side of the portal. Later, news channels confirm the invasion as genuinely extraterrestrial.

A husband and a wife found a Chitauri weapon and used it to rob banks. However, SHIELD caught them and worked on experimenting with the technology.

A Chitauri helmet was recovered after the Battle of New York and contained a virus that is transmitted by electrostatic.

The Chitauri were referred to as aliens and glimpsed in Tony's nightmare.

A Chitauri warrior was shown in a case, in the Collector's collection.

Chitauri attacking New York was seen in the footage of Thunderbolt Ross showed the Avengers as one of the reasons the Sokovia Accords.

The Chitauri are seen in a flashback as they wipe out half of the Zen Whoberi on Thanos' orders.

A couple of Chitauri appear in the Sanctuary II, where they've imprisoned Nebula. One of the aliens, fix her up, but it ended up getting it's neck snapped by Nebula.

The Chitauri are seen when the heroes travel back in time to New York in 2012 to collect the Tesseract and the Eye of Agamotto.

Later, Thanos summons an army of Chitauri to attack Avengers Headquarters in retaliation for Hulk/Bruce Banner using the Infinity Gauntlet to undo the snap and bring everyone back to life.

Whilst the creatures don't physically appear, they are brought up by Bruce Banner, in suggestion, as a possible candidate for the origins of Wenwu's Rings.

The Chitauri serve Korvac as troop, they fight against the Guardians, Spider-Man, and Nova because they seek to destroy the entire galaxy. After a fierce fight, the Chitauri and Korvac are defeated.

The Chitauri are a warrior race, a hybrid between organic beings and machines. They're controlled by a Mother Ship which never shows up on the battlefield, instead preferring to stay in the Chitauri's own dimension, far away from the conflict. Other than being minions to Loki, the Chitauri are never really elaborated upon, but it is known that they have superhuman physical abilities, as they are seen several times climbing vertically up buildings with their bare hands. However, they still seem to be no more durable than an average human, and are seen being dispatched by a variety of weapons including bullets, blunt objects, and explosives. Notably, they seem to like getting into close combat when possible.

It is not known to what degree the Chitauri are sentient, and to what degree they are just bio-mechanical drones of Thanos. Their cybernetic enhancements, as well as the fact that they're vitally linked to the mother ship, seems to imply that they are little more than slaves. However, one is seen fumbling with a grenade and getting scared when it goes off in his face, meaning that they are able to react to and perceive danger like sentient beings. When the first Leviathan to come through the wormhole is destroyed by The Avengers, the Chitauri react with, what seems like, rage. They also appear to scream in pain when they die, and bleed when hurt. They are as frail as humans, much like their comic book counterparts.

It's heavily implied by The Other that the Chitauri's military intelligence gravely underestimated the human forces, even discounting the presence of The Avengers.

The service rifle of the Chitauri is a long, thin weapon with a bayonet on the end. These weapons seem to be plasma based and are fired semi-automatically. The weapon is simple to operate, and humans (namely Natasha Romanoff and Clint Barton) have been seen using it without much trouble. Chitauri infantry also appear to be equipped with armor, but not in vital spots. This leaves them vulnerable to bullets, arrows, and other ranged weaponry. They also employ an arm cannon similar to a grenade launcher (dubbed Item 47 by S.H.I.E.L.D.)

The main aircraft employed by the Chitauri is a small, flying chariot-like vehicle crewed by a single Chitauri warrior hooked up to the craft via a neural interface, with room for three passengers. On the front of the vehicle is a plasma cannon operated by the driver. These cannons have modest fire power, capable of destroying cars in single shots injuring the Hulk, and doing noticeable damage to Iron Man. While these craft are fairly fast, it is shown that human aircraft (such as the one piloted by Clint Barton) can take out several of them easily. They also move slowly enough to be tagged by Clint Barton using his signature bow.

Their troop transports take the form of the Leviathans, very large serpent-like creatures. These Leviathans can carry hundreds of Chitauri infantry, and are quite durable. However, they do not have any weaponry aside from simply ramming their target, and are shown to be vulnerable to large amounts of explosives, electricity, or kinetic force. 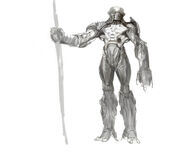