2004-present
Chloë Grace Moretz is an American actress and singer. She is best known for portraying Hit-Girl in the 2010 superhero film, Kick-A**, Carrie White in the 2013 remake Carrie, and Isabelle in the 2011 film, Hugo.

For Disney, she voiced Darby in the animated series, My Friends Tigger & Pooh. She also made a small cameo appearance as "Newspaper Girl" in the 2014 film, Muppets Most Wanted and also voiced young Penny in Disney's 2008 animated feature film, Bolt. She even played Sherri Maltby in 2 episodes of Desperate Housewives and voiced Boodles in Mickey Mouse Clubhouse. In this upcoming Oz sequel, she voiced the China Girl, replacing Joey King. 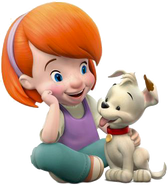 Darby
(My Friends Tigger and Pooh)

Retrieved from "https://disney.fandom.com/wiki/Chlo%C3%AB_Grace_Moretz?oldid=4106380"
Community content is available under CC-BY-SA unless otherwise noted.