For Disney, she currently portrays Daisy Johnson aka Skye/Quake on the ABC/Marvel television series, Agents of S.H.I.E.L.D. and in Marvel Rising: Secret Warriors, Hailey in 7 episodes of Nashville, Swifty in Jake and the Never Land Pirates, and Chase in Tinker Bell and the Legend of the NeverBeast.

Chloe Bennet speaks at the Agents of S.H.I.E.L.D. panel at the 2013 Summer TCA Tour. 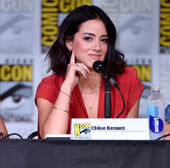 Chloe Bennet attending the 2019 Toronto International Film Fest.
Add a photo to this gallery
Retrieved from "https://disney.fandom.com/wiki/Chloe_Bennet?oldid=3922991"
Community content is available under CC-BY-SA unless otherwise noted.