Mickey and the gang build a train, so they can carry the professor's non-melting snow from the Mistletoe Mountain to the Clubhouse. Later, they must pick up a variety of passengers for a surprise. 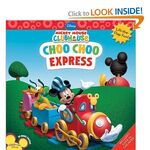 The Title Card of the Episode.