More attention than Stitch, being the best

Similar powers to Stitch, including spike roll, but not as effective at using them

“My, 626. You are so great. Look, I make a DNA enhancement for my finest creation! Oooh, I am sick of it! I am sick of it! Well, everything's about to change. We'll see how Jumba feels about you now that I have used the DNA on myself!”
―621

Chopsuey, A.K.A. Experiment 621, is an illegal genetic experiment created by Jumba Jookiba, and the main antagonist of the video game Disney's Stitch: Experiment 626. He has all of Stitch's powers but is less capable. He is jealous of all the attention that Stitch gets.

Experiment 621 is shown to be sadistic, prone to jealous hatred and possesses a superiority complex, shown when he became obsessed with proving he was "superior" to 626 which included trying to kill him. However, this attitude can be somewhat justified, since Jumba harshly criticized and completely neglected 621 when 626 proved to be a more effective experiment.

621 may be mentally unstable due to his unusual tendency to burst into random laughter and because of his merciless rage. Despite this, he appears to be more intelligent than most experiments, including his ability to speak fluent English.

621 does not appear to be a very capable fighter, only fighting his battles with sheer strength rather than skill. He can also be quite reckless and clumsy in such circumstances.

In his regular form (not counting his extra limbs), 621 resembles a slim, dark green koala standing on two, very slim legs. The fur on his belly, bottom jaws, and around his eyes, however, are a dull yellow color. On his rather large-in-proportion head are a pair of bugging black eyes, a large black-green round nose, and a wide underbite with two jutting fangs. His ears are quite long and slim, almost like a bat's own ears, and has creamy yellow insides. He is quite short, standing at three feet, including his dark yellow spiky Mohawk.

He wears a dark brown sleeveless space suit with a circle consisting of a darker brown border and yellow center on his chest and patches consisting of a brown border and yellow center on each of his legs, black belt with a yellow square buckle and collar, which sprouts into very thin arms ending with long black claws and creamy yellow inner hand/paw pads. His slim, short legs all end with round feet dotted with black toes.

When in his mutated form, there is a major difference in his appearance. 621 is now standing at around 6 feet. His eyes are much bigger and bug out a lot more, while his ears are notably shorter than they were before mutation. His chest is quite thick and large now. Sprouting from his chest are some very slim arms that grow into large, muscular forearms ending with elongated black claws. His lower torso is quite small compared to his huge chest, but these sprout into skinny legs with huge monstrous feet. On his back, his spikes have become much sharper and are 1 foot long.

621 has similar powers to Stitch but is not as effective at using them. He is both very physical and well-equipped. He is able to use a jetpack and a grapple gun.

Such material comes in the form of hair, blood, or even nails. The mutation changed 621's body enough for him to handle such consumption (although, most experiments could already handle such a diet). When enough DNA is absorbed, he takes on this stronger, faster form for five posts. Afterwards, he reverts back to normal and will have to search for more material to consume for another mutation.

His weapons are two plasma cannons that he normally keeps hidden with his retracted extra arms. He has a secondary gun, used more for self-defense. This gun fires a beam of green energy at targets, and can teleport them short distances no more than fifteen feet. Where the target reappears is random.

621 was able to mutate himself into a much larger and stronger creature by collecting DNA strands. In this form he is physically more powerful than Stitch but less skilled. 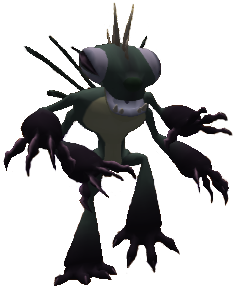 Experiment 621 was the 621st genetic experiment created by Jumba with Hämsterviel's funding. He was presumably designed either as a prototype of Stitch and Reuben, or for Stitch/Reuben's purpose. His original purpose was to collect strands of DNA around the galaxy to help Jumba create more experiments.

621 had been sent around the galaxy to collect DNA strands to help Jumba create more experiments; however, Jumba had been disappointed with his results.

Jumba later gave this mission to 626 and was more satisfied with 626's achievements. Jealous of Experiment 626 because of all the attention Jumba was giving him, 621 secretly collected his own DNA and used it to mutate himself into a bigger, stronger form. 621 then battled 626, but was defeated when 626 tricked him into electrocuting himself. The unconscious Experiment 621 was apprehended by Gantu along with Jumba and 626 shortly after.

621 and the other first 624 experiments were deactivated and smuggled to Earth by Jumba during his mission to capture Experiment 626.

All of the experiment pods were released and scattered across the island of Kauai.

Lilo and Stitch: The Series

At an unknown point after this, Experiment 621 was presumably captured and named Chopsuey.

All 624 experiments, including Chopsuey, were rounded up by Leroy and taken to a stadium to be destroyed. However, Lilo, Stitch, Jumba, Pleakley, Reuben, and Gantu arrived before the experiments could be destroyed.

It is unknown whether or not Chopsuey participated in the following battle between the experiments and the Leroy clones.

The Leroys soon gained the upper hand in the battle, but were defeated when Lilo, Stitch, Reuben, and several other experiments performed the song "Aloha ʻOe", which caused the Leroy army to shut down due to the original Leroy's fail-safe.

Goof: the tip of 621's highest spine clips through his head

"He's putting DNA in the mutator!"

621 somewhat dizzy after his mutation

"Now we settle this!"