2
Christopher "Chris" Diamantopoulos (pronounced De-uh-men-top-poll-us) is a Greek-Canadian actor, voice actor, and comedian. He is best known for his roles in Law & Order, Up All Night, The Office, Silicon Valley, and for portraying Moe Howard in the 2012 film reboot of The Three Stooges. He also voiced Master Eon in the Skylanders spin-off television series Skylanders Academy. He is the husband of actress Becki Newton.

For Disney, he currently voices Mickey Mouse for the 2013 Mickey Mouse television shorts series (in place of Mickey's usual voice actor Bret Iwan) and in The Wonderful World of Mickey Mouse, and Storkules and Drake Mallard as the new Darkwing Duck (replacing Jim Cummings) in the DuckTales reboot. He also voiced Brock Thunderstrike in Tangled: The Series and Ed Zecutive in Big City Greens. He later voiced Frank Heffley in the 2021 version of Diary of a Wimpy Kid.

Morty and Ferdie
(The Scariest Story Ever) 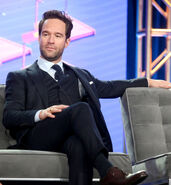 Chris Diamantopoulos speaks at the Let's Get Physical panel during the 2018 Winter TCA Press Tour.