Disney Wiki
Register
Don't have an account?
Sign In
Advertisement
in: People, Wander Over Yonder, Gravity Falls,
and 15 more

Houghton followed in his brother Shane's footsteps and started working in animation. He worked at Nickelodeon as a storyboard artist on shows, such as Fanboy & Chum Chum and Harvey Beaks, the latter of which he collaborated with his brother.

He got to work at Disney on huge shows, such as Wander Over Yonder and Gravity Falls and helped out on the episode "Clogged" of Mickey Mouse. Chris and Shane would eventually get their big break creating the show, Big City Greens which at the time was called Country Club. Chris himself voiced the lead character of Cricket Green, who was physically based on an old childhood photo of himself. He also voiced Falcon Tuxedo in the episode "People Watching" and Topher in the episode "Animation Abomination", a character who is meant to serve as a self-parody. He voices Bill in The Owl House episode "Edge of the World". 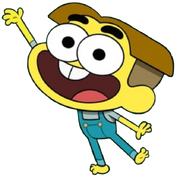