Sunshine Deia Tutt (2008-2009)
Christopher Lee "Chris" Kattan is an American actor, voice actor, and comedian, probably known for his roles as Doug Butabi in A Night at the Roxbury and the titular character in Corky Romano.

For Disney, he voices King Zongo in the Disney Junior animated series Jake and the Never Land Pirates. 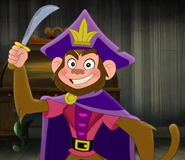 Chris Kattan speaks at The Middle panel at the 2009 Summer TCA Tour.

Chris Kattan attending the 40th anniversary of Saturday Night Live in February 2015.
Add a photo to this gallery
Retrieved from "https://disney.fandom.com/wiki/Chris_Kattan?oldid=3794458"
Community content is available under CC-BY-SA unless otherwise noted.