Christopher "Chris" Lair[1] (voiced by Cesar Flores[2], although he was scheduled to be voiced by Toby Linz) is a recurring character of Jetix's W.I.T.C.H.

He is the younger brother of Irma, aged around eight years old. Although he often annoys his sister and disobeys her, she cares about him a lot, as shown in the Season 2 episode "I is for Illusion". He has appeared in "Return of the Tracker", "The Mudslugs", "I is for Illusion", and "J is for Jewel".

He strongly resembles a male version of Irma and has the exact same hair and eye color as she does. 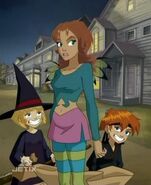