2
Christopher "Chris" O'Dowd (born October 9, 1979) is a Irish actor who is best known for his role as Miles Daly in the Epix comedy series Get Shorty and Roy Trenneman in the Channel 4 comedy series The IT Crowd.

For Disney, he played Richard in Thor: The Dark World, and he will be voicing Tigger in Christopher Robin.[1] 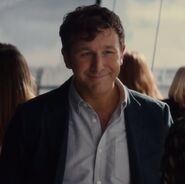 Tigger
(Christopher Robin)
Add a photo to this gallery