Chris Sanders was born in Colorado Springs, Colorado on March 12, 1962, into an artistic family. Sanders is the middle of three children.

As a child, Sanders was completely surrounded by art. His family used to paint together and encourage drawing. Sanders, however, also enjoyed writing short stories and sharing them with his family. At age ten, Sanders became interested in animation after seeing Ward Kimball animated shorts on The Wonderful World of Disney. While attending Arvada High School, his storytelling skills enabled him to serve as the school newspaper cartoonist.

It wasn’t until Sanders heard about the California Institute of the Arts (CalArts) that he considered art as a means of making a living. After applying to CalArts' Animation Program, he was accepted to the program and majored in character animation. Sanders completed his education at CalArts and graduated in 1984.

Sanders began his career as a character designer for Muppet Babies. He also served as a storyboard artist, artistic director, production designer and character designer on Beauty and the Beast, The Lion King, and Mulan before ultimately bringing life to Lilo & Stitch.

On December 16, 2006, several internet animation fan sites, including AnimatedNews.com, reported that Sanders had been removed as the director of the upcoming Disney animated film American Dog by John Lasseter. A New York Times interview with Lasseter later revealed that Sanders was negotiating his exit from Disney. After the departure of Sanders from Disney, directing duties were handed to Chris Williams and the film was retitled Bolt. Sanders has since worked for DreamWorks Animation, directing How to Train Your Dragon (2010) and The Croods (2013), and serving as executive producer for How to Train Your Dragon 2 (2014) and its sequel, How to Train Your Dragon: The Hidden World (2019). Sanders worked for Fox on a film adaptation of The Call of the Wild, which was released in February 21, 2020. Due to Disney's acquisition of 21st Century Fox in March 2019, the film marks the first time since the 2000s that Sanders directed a film under the Walt Disney Company.

Despite his departure from Disney, Sanders still reprises the voice of Stitch in new Disney projects when needed. However, he did not voice the character in either Stitch! or Stitch & Ai, both of which were produced in East Asia, despite the latter series having American animators contribute to its production. 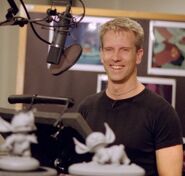 Chris Sanders behind the scenes of Lilo & Stitch.

Chris Sanders with Kirk DeMicco at premiere of The Croods in March 2013.