Williams was born in Missouri and spent the first 25 years in Waterloo, Ontario, Canada, where his father taught psychology courses at the University of Waterloo. After graduating from the animation program at Sheridan College, he was recruited by Disney and moved to Los Angeles.

Williams previously worked in the story department for Mulan, The Emperor's New Groove, Brother Bear, and Bolt, in which he later directed with Byron Howard, both of them replacing Chris Sanders as the original director. Williams co-directed (with Don Hall) the animated film, Big Hero 6, inspired by the Marvel Comics of the same name.

He was set to direct the upcoming animated feature film, King of the Elves, based on the story by Philip K. Dick, before it was cancelled.

Chris Williams started working on the feature film Bolt in 2007 with Byron Howard, shortly after that, Chris Sanders had been released and John Lasseter had taken over the project. During the production of Bolt, Chris Williams focused mostly on the story whereas the other director, Byron Howard, was mostly concerned with the design and animation. Both Chris Williams and Byron Howard worked very closely with John Lasseter at the time, and the movie, which marked a milestone in Disney Animation as the first critically acclaimed animated feature from the studio in almost ten years, was released on November 24, 2008. 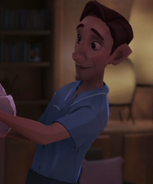 Chris Williams and Byron Howard at the premiere of Bolt in November 2008.

Chris Williams and Don Hall at the premiere of Big Hero 6 in October 2014.