2006-present
Chrissie Marie Fit is an American actress and singer. In 2007, Fit rose to prominence after she was cast as the character Mercedes Juarez in the medical drama General Hospital. She is also known for her role as CheeChee in the 2013 Disney Channel Original Movie, Teen Beach Movie, and its 2015 sequel.

Chrissie Marie Fit was born in Miami, Florida to Maria Christina and Miguel Fit. Chrissie started singing at the age of five and always had a flare for the dramatic. She discovered the world of acting when she was about ten years old and was hooked. She performed in countless plays and musicals throughout her school years and eventually started working with theatre companies in her hometown of Miami, Florida. She attended Florida International University and was a sister of Alpha Xi Delta.

Fit made her acting debut on the 2006 Nickelodeon television series, Zoey 101, as an unspecified role; which is possibly a supporting character of the series. She made her first recurring role on the American daytime television medical drama, General Hospital, where she played Mercedes; where her role lasted from 2007-2012. She also worked on the web series, The Subpranos, playing as Denise Flores de la Rosa. She also appeared in Southland, House, M.D., Night Shift, and The Middleman.

In 2012, Fit returned to acting with Filly Brown, where she played Lupe Tonorio.

In 2013, She was cast as CheeChee in the Disney Channel Original Movie, Teen Beach Movie.

Aside from acting, Chrissie has been working on her writing. She finished her first screenplay, Love's A Trip, with writing partner, Cyrina Fiallo. They are now working on a screenplay for producer Barney Cohen, and continue to write for their web series, The Subpranos. She voices Amanda Lopez in Milo Murphy's Law and Princess Valentina in Elena of Avalor. She played Lupita in the CBS/ABC Studios TV show, Code Black. 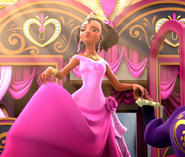 Chrissie Fit at premiere of Teen Beach Movie 2 in June 2015.

Chrissie Fit attending the 2016 MTV Movie Awards.
Add a photo to this gallery

Retrieved from "https://disney.fandom.com/wiki/Chrissie_Fit?oldid=4182984"
Community content is available under CC-BY-SA unless otherwise noted.