Emmeline
Christian Charles Philip Bale is a Welsh actor who is best known for his role as Patrick Bateman in American Psycho and Bruce Wayne/Batman in Christopher Nolan's The Dark Knight trilogy.

For Disney, he played Jack "Cowboy" Kelly in the 1992 Disney film, Newsies and voiced Thomas in the 1995 Disney animated feature film, Pocahontas. He also played Thomas Berger in the 1993 Hollywood Pictures film, Swing Kids, Quinn Abercromby in the 2002 film, Reign of Fire, Alfred Borden/The Professor/Bernard Fallon in the 2006 Touchstone Pictures film, The Prestige, and Ken Miles in the 2019 Fox film, Ford vs. Ferrari. He even voiced Howl Jenkins Pendragon in Howl's Moving Castle. He will play an undisclosed role in Thor: Love and Thunder. 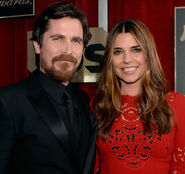 Retrieved from "https://disney.fandom.com/wiki/Christian_Bale?oldid=3977389"
Community content is available under CC-BY-SA unless otherwise noted.