Isabel Cowles
Lily Cowles
Christine Jane Baranski is an American film, stage, and television actress who is best known for her television role as Maryann Thorpe on the CBS sitcom Cybill from 1995 to 1998. Since 2009, she currently stars as Beverly Hofstadter on the sitcom The Big Bang Theory and Diane Lockhart on the legal and political drama series The Good Wife and its spin-off The Good Fight on CBS.

For Disney, she played Prunella Stickler in the 2003 direct-to-video film Eloise at the Plaza and reprised her role in its sequel. She also portrayed the Wicked Stepmother in the 2014 live-action fantasy musical film Into the Woods and Carol in Life with Mikey. She will voice Mrs. Devine in Fancy Nancy. 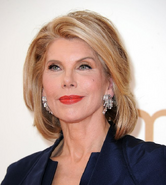 Christine Baranski at the 63rd Primetime Emmy Awards in September 2011.

Christine Baranski speaks at the The Good Fight panel during the 2019 Winter TCA Press Tour.
Add a photo to this gallery