Disney Wiki
Register
Don't have an account?
Sign In
Advertisement
in: People, The Little Mermaid, Cinderella,
and 14 more

Christopher Daniel Barnes, also known professionally as C.D. Barnes and C.B. Barnes, is an American actor and voice actor who is also widely known to Disney fans for providing the voice of Prince Eric in Disney's 1989 animated feature film, The Little Mermaid, and reprised the role again in the video game, Kingdom Hearts II. He was only 16 years old when he first provided the voice, but the producers cast him because he sounded much older. He also provided the voice for Prince Charming in Cinderella II: Dreams Come True and Cinderella III: A Twist in Time, additional voices in Disney Princess Enchanted Tales: Follow Your Dreams, and Electro, Wolf Spider, and Spyder-Knight in Ultimate Spider-Man.

Barnes was born on November 7, 1972 in Portland, Maine. His family moved to New York when he was eight years old, where he began his acting career. He moved to Los Angeles for the television series Starman and followed that show with the sitcom Day by Day. His other television credits include As the World Turns, The Golden Girls, Captain Planet and the Planeteers, Blossom, Empty Nest, Wings, Real Ghosts, Beverly Hills, 90210, Malcolm & Eddie, Sonic Underground, 7th Heaven, JAG, Touched by an Angel, and Jackie Chan Adventures.

He is also known for providing the voice of Peter Parker/Spider-Man in the 1994 television series Spider-Man: The Animated Series, and for his portrayal of Greg Brady in The Brady Bunch Movie and A Very Brady Sequel.

Barnes earned his BA in 2004, and his MA in 2009 and was once the national teenage spokesperson for Greenpeace. He has also written a novel called The Warrior. 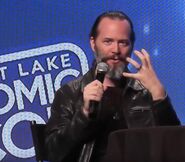