3
Christopher Reeve was an American actor, film director, producer, screenwriter, author, and activist who was best known for his role as the DC comic book hero Superman in the films released between 1978 and 1987.

His only Disney-related roles include one of the Japanese ple vaulters in episode 221 of The Muppet Show; a guest appearance on The Muppet Show in episode 418; Fredrerick Dallas/Phillip Brent in the 1992 Touchstone Pictures film Noises Off; and a cameo appearance in The Muppets Go Hollywood, contending with Charles Durning for a chance to dance with Miss Piggy.

He appeared in the Road to Avonlea episode "A Dark and Stormy Night" as Robert Rutherford.

In addition, he made guest appearances on Sesame Street in 2000. 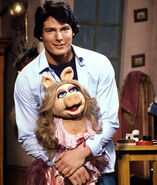 Add a photo to this gallery
Retrieved from "https://disney.fandom.com/wiki/Christopher_Reeve?oldid=3959170"
Community content is available under CC-BY-SA unless otherwise noted.