Start a Wiki
watch 04:00
'Christopher Robin' - Extended Sneak Peek
Do you like this video?

$197 million
Christopher Robin is an American fantasy comedy-drama film. It acts as a live-action continuation of the Winnie the Pooh animated features, which are, in turn, based on the novels by A.A. Milne.

In the heartwarming live action adventure Disney's Christopher Robin, the young boy who shared countless adventures with his band of lovable stuffed animals in the Hundred Acre Wood is now grown up and living in London but he has lost his way. Now it's up to his childhood friends to venture into our world and help Christopher Robin rediscover the joys of family life, the value of friendship and to appreciate the simple pleasures in life once again.

Christopher Robin is a young boy who has stuffed friends in a place called the Hundred Acre Wood – Winnie the Pooh, Tigger, Piglet, Eeyore, Kanga, Roo, Owl and Rabbit – all of whom had great adventures with. However, he is later sent to boarding school, so his friends throw him a goodbye party. While everybody sleeps after eating cake, Christopher has a conversation with Pooh, in which they both conclude that "doing nothing often leads to the very best kind of something". At their meeting spot, Christopher tells Pooh that he will never forget him.

Christopher goes to boarding school, where he gets reprimanded by the teacher for drawing pictures of Pooh during class. Some time later, Christopher is told that his father died and, thus, he's the man in charge. After entering adulthood years later, Christopher moves to London. While on a bus, Christopher meets and eventually marries an architect named Evelyn, with whom he has a daughter named Madeline. After serving in World War II as a soldier, he works as an efficiency expert at Winslow Luggages. He neglects his family due to his demanding job and plans on sending Madeline to boarding school as well, both under the assumption that will get them a better life. With the company hitting hard times due to the war Christopher’s boss, Giles Winslow, tells Christopher to decrease expenditures by 20%, largely by choosing which employees to lay off and to present his plan on Monday. This causes Christopher to reluctantly miss joining his family at their countryside cottage in Sussex for a summer-ending weekend, upon informing his family of this, Christopher and Evelyn had a discussion in which she tries to explain him that he can't focus on his job, but fails. The next morning after saying goodbye to them, Christopher notices the drawing of him and Pooh as Madeline left a note to him. But before he puts it up, he goes to work and accidentally knocking over a honey jar.

Meanwhile, Pooh awakens and does his stoutness exercises. After he realizes that his honey is gone, he goes to Piglet's house, then Rabbit's house, then Eeyore's, but his friends aren't there. Pooh comes across the door and he decides to travel through and finds himself in London. He reunites with Christopher, who is shocked to see Pooh, but takes him back to his home after a neighbor bothers Christopher about a card game. After a night and morning of chaos (including Pooh knocking down all of his kitchen shelves in search of honey), Christopher escorts Pooh back to Sussex on the next train, bringing his work papers along with him.

After sneaking past Christopher's cottage, the two enter the Hundred Acre Wood. Christopher becomes exasperated by Pooh's absent-mindedness and fear of Heffalumps and Woozles and angrily tells Pooh that he isn't a child anymore, before the two get separated in the fog. After falling into a "Heffalump Trap", which is then flooded by rainfall, soaking him and his belongings, Christopher discovers Eeyore and Piglet, who lead him to the others, hiding in a log out of fear of a Heffalump. Unable to persuade his friends that he is truly Christopher Robin, he pretends to defeat the Heffalump to convince them. Finally realising that he is Christopher Robin, they joyfully greet him. When they reunite with Pooh at their meeting spot, Christopher apologizes for getting upset earlier. Christopher tells Pooh how lost he feels, but Pooh reminds him that they have found each other and comforts him with a hug.

The next morning, Christopher, realising how late he is, rushes from the Hundred Acre Wood to make his presentation in London. He encounters his family and, unwilling to tell them about his old friends in the Hundred Acre Wood, leaves abruptly, upsetting Madeline. Pooh discovers that Tigger removed Christopher's work papers when drying his briefcase, so Pooh, Tigger, Piglet and Eeyore decide to travel to London to give it back. They meet Madeline, who recognizes them from her father's drawings. She joins them, wanting to dissuade her father about boarding school; Evelyn follows after discovering a note Madeline left.

At the meeting, Christopher discovers that his papers aren't in his briefcase, which instead contains objects from the woods that Tigger left for him, including Eeyore’s detachable tail. Evelyn arrives and Christopher joins her to search for Madeline. Madeline, Pooh and the others stow away in a truck carrying Winslow company crates, but Tigger, Eeyore and Piglet are accidentally thrown out when Tigger's tail snaps shut and they encounter Christopher and Evelyn in the process. Pooh and Madeline arrive near the Winslow building and reunite with Christopher, Evelyn and the others, but Madeline accidentally trips on the stairs and loses all but one of the papers, upsetting her and Pooh. Christopher assures Madeline of her importance to him and that he won't send her to boarding school.

Christopher improvises a new business plan involving reducing the prices of luggage, giving employees paid leave and selling their luggage to everyday people instead of just the wealthy to increase demand. Winslow Jr. dismisses the idea, but his father, Old Man Winslow warms to it and agrees to the plan. Christopher then tells Giles that he is in fact, a Woozle. Winslow is humiliated when it's discovered that he contributed nothing to the plan, having been golfing all weekend. Christopher later takes his family into the Hundred Acre Wood with Pooh, Eeyore, Piglet and Tigger to meet the rest of his friends. He and Pooh then share a tender moment at their special spot together.

In a mid-credits scene, the employees of Winslow's are seen having fun at the beach while Richard M. Sherman performs "Busy Doing Nothing" on a piano. Pooh, Piglet, Eeyore and Tigger are relaxing on beach chairs with Eeyore saying "Thank you for noticing me".

The film was announced on April 2, 2015 under the name Winnie the Pooh and was be written by Alex Ross Perry.[1]

More than a year later, in November 2016, Marc Forster was announced to direct the film and that the film will be titled Christopher Robin.

On March 1, 2017, it was announced that Tom McCarthy had been hired to rewrite the script due to Alex Ross Perry's version not working out very well.[2]

In April 2017, Ewan McGregor was announced to play the title character.[3] It was also reported that Allison Schroeder was also hired to work on the script as well.[4] On August 2, Hayley Atwell was announced to play the titular character's wife, Evelyn and Bronte Carmichael will play Madeline the titular character's young daughter and Mark Gatiss will play Giles, Christopher Robin's boss.[5]

On August 30, 2017, it was announced that another newcomer, Nick Mohammed, was cast to play Piglet for the film.

The official synopsis and cast list was revealed on January 16, 2018 and confirmed that the additional animated cast of Rabbit, Kanga and Owl would also appear, though with new voice actors, Peter Capaldi, Sophie Okonedo and Toby Jones.

Chris O'Dowd was originally gonna provide the voice of Tigger in the film, but when an audience at a screen test reacted negatively towards his portrayal of the character, he step down and Jim Cummings- who, like with Pooh, voiced the character since the late 80s- took over.

Filming began in early August 2017 in the United Kingdom and ended on November 4, 2017.

The film received an approval rating of 72% on Rotten Tomatoes, based on 225 reviews, with an average rating of 6.1/10. It's consensus reads, "Christopher Robin may not equal A. A. Milne's stories – or their animated Disney adaptations – but it should prove sweet enough for audiences seeking a little childhood magic."[6]

The Disney Wiki has a collection of images and media related to Christopher Robin (film). 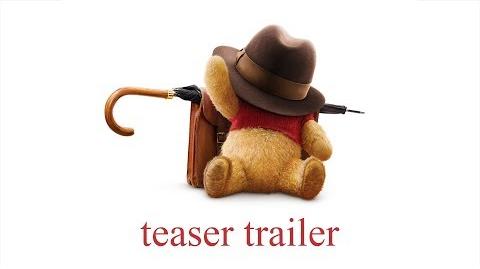 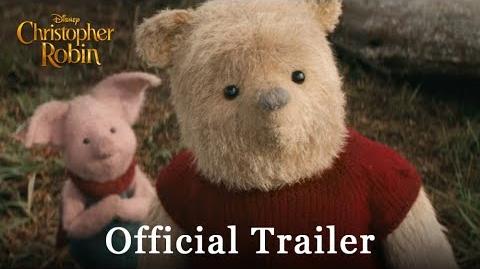 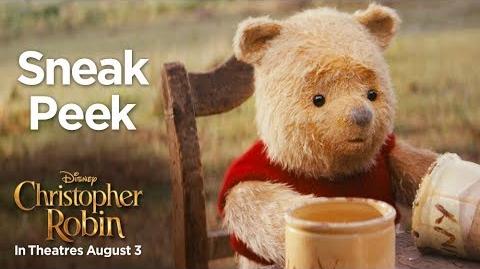 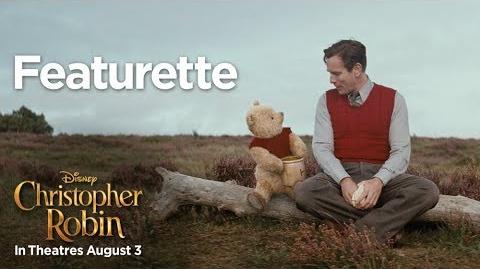 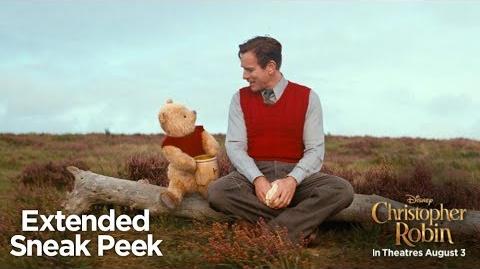 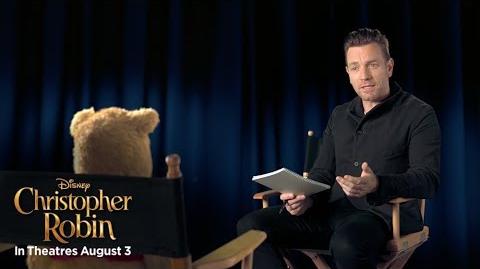 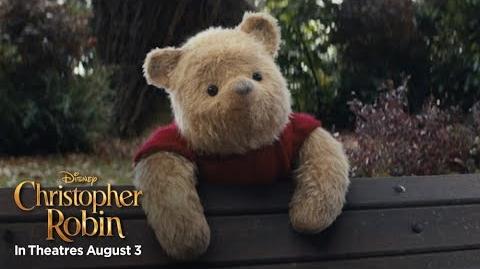 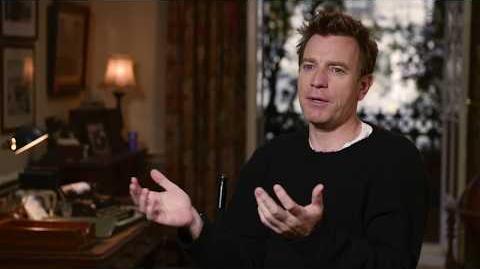 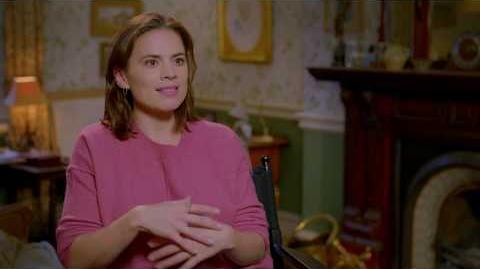 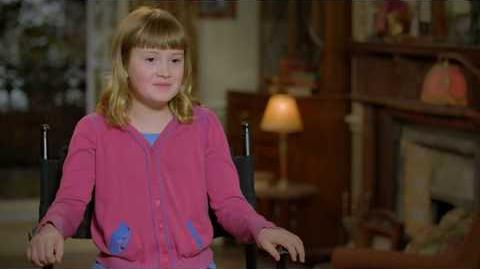 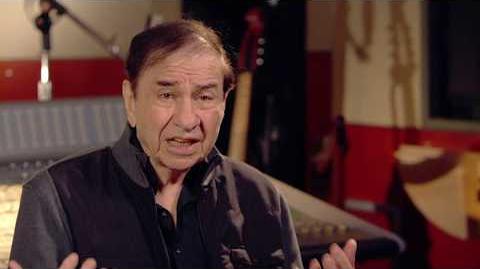 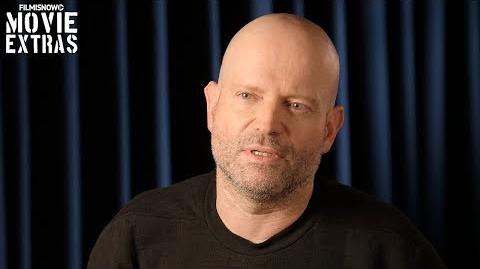