Chubby Checker
Chubby Cheddar is a character in the attraction Food Rocks at Epcot.

Showing up only as a projected shadow, Chubby Cheddar performs Let's Exercise, a parody of "The Twist" while holding a cheese grater over his head.

Though his appearance suggests shadow puppetry, Chubby Cheddar was a fully dimensional puppet with three performers controlling his mouth, his dancing legs, and the cheese grater over his head, shot in front of a green screen. 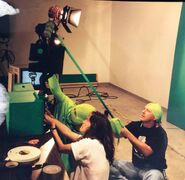 Add a photo to this gallery
Retrieved from "https://disney.fandom.com/wiki/Chubby_Cheddar?oldid=4163579"
Community content is available under CC-BY-SA unless otherwise noted.