Retractable energy slingshot
Chuck is the Burners computer programmer and is the brains of the group. He rides passenger in Mutt, but has his own seldom driven car, Blonde Thunder.

With intelligence such as his, he can always find an escape route or solution to whatever problem the Burners are in, and is usually improving the Burners' computer and security systems. Although he's usually terrified of whatever dangerous situation Mike has put him in, he's incredibly loyal and will never bail on him.

Chuck is slightly taller than Mike, though he slouches a lot so it's hard to tell. He has a light skin and a few freckles on his cheeks. He has chin-length blond hair that typically falls in front of his eyes. He wears a light blue shirt with his Burner logo on the chest, jeans, and sneakers. Occasionally when LARPing he will wear a floor-length dark green cowl.

Somewhat of a computer whiz, Chuck has used his hacking abilities several times to decode transmissions, jam signals, and more. Also, despite not being much of a fighter, he's been known to use a hi-tech retractable slingshot. He is also a capable leader of his LARP group. 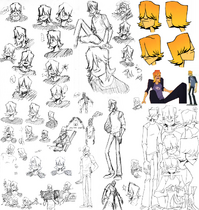 Add a photo to this gallery
Retrieved from "https://disney.fandom.com/wiki/Chuck_(Motorcity)?oldid=3275720"
Community content is available under CC-BY-SA unless otherwise noted.