Daisy (formerly)
Bonnie
Chuckles the Clown is a minor character in the 2010 Disney/Pixar animated film, Toy Story 3. He is a stuffed clown toy voiced by the late Bud Luckey who also voiced Rick Dicker in The Incredibles. He is the one who tells Woody of Lotso's past. He, along with his friends Big Baby and Lotso, used to be owned by a girl named Daisy until one day at the park, they accidentally got left behind. When they got home, they found out Lotso had been replaced. Lotso forced Big Baby and Chuckles to abandon Daisy, while Chuckles was found by Bonnie and taken to her home later on.

Sometime before the events of Toy Story 3, Chuckles was owned by Daisy and it seemed he wore a constant smile. He was also a witness to see Lots-o'-Huggin' Bear, or Lotso for short, being unwrapped by Daisy during Christmas. The fact that Lotso being Daisy's favorite failed to slip past Chuckles' eyes because Chuckles claimed that he never saw a toy being more loved by any other kid. He was also a very good friend to Big Baby and Lotso during the time of being under Daisy's ownership.

Sadly, one day would ultimately put this friendship to an end: one day, while playing with Lotso during a picnic, Daisy had gone to eat lunch and accidentally left Lotso, Chuckles, and Big Baby on the ground. After lunch, because Daisy had a fun-filled day and a good lunch, she fell asleep. Because of this, he (Chuckles), Lotso, and Big Baby were accidentally left behind. But, because Lotso believed that Daisy would return for them one day, they waited for quite some time for her to return. After waiting for a long time, and one rainy day, the trio finally gave up waiting for Daisy, so they went to her if she wouldn't go to get them.

When they finally got to Daisy's, it was too late because Daisy had claimed another Lotso bear to compensate for the original Lotso that she had accidentally abandoned. Lotso was heartbroken as a result. Then Lotso, filled with sorrow, had snapped: the jealousy, bitterness, and resentful side of him shown, he then decided to leave. Chuckles had tried to comfort Lotso, knowing that his actions were out of anger, and even pointed out to Lotso that Daisy had only replaced him and that she still loved them all. However, this didn't bend Lotso's will at all. Instead, he shouted back at Chuckles and lied that she replaced all of them, not just Lotso himself.

Chuckles then saw Big Baby's pendant being torn off by Lotso and being dragged away, shouting at Big Baby that Daisy had no love for him anymore. Chuckles then grabbed the pendant and stuffed it in his pocket, the only thing that would have caused Big Baby to see the light because Big Baby still had a love for Daisy, that had the inscription "My Heart Belongs To Daisy" and tagged along with Lotso and Big Baby, begrudgingly.

The three lost, cast-off, unloved, unwanted toys then hitched a ride on a Pizza Planet Truck, until they fell off due to the truck hitting a bump, and they wounded up at the Sunnyside Daycare, where Lotso transformed it into a prison (with Big Baby working as his lackey), much to Chuckles' dismay. Eventually, Chuckles was damaged (most likely by Lotso) and that was when Bonnie found him and took him home with her (he also implied that many toys that were damaged like him weren't as lucky as he was). At Bonnie's house, Chuckles would warn Bonnie's toys about Lotso and the cruel system of Sunnyside, resulting in Bonnie's toys being wary of the place, especially Lotso.

When his first owner Daisy owned him, Chuckles was happy. Ever since Lotso became evil and took over Sunnyside, he became downcast, brokenhearted, and depressed (though he still smiles in toy mode when humans are around). At the end of Toy Story 3, when he sees the picture that Bonnie (his current owner) drew a picture of him, he gives his first genuine smile in years.

Chuckles is a clown doll with blue wilted hair. His hair used to be straightened up when Daisy had him. He also wears a bright yellow shirt with dark yellow spots, a clown collar, cuffs on his sleeves, purple suspenders, red gloves, and shoes made of rubber.

Chuckles is first introduced while Woody is at Bonnie's house. When Woody mentions Sunnyside, Bonnie's other toys become surprised to see that he has escaped without incident and asks him how he did it. Woody asks them what they meant, to which Mr. Pricklepants describes Sunnyside as a toy prison where an evil, a strawberry-scented bear is at power. Woody asks why, and Mr. Pricklepants directs him to Chuckles, who tells Woody the story of Lotso's past and hands him the pendant that once belonged to Big Baby.

After Andy gives his toys to Bonnie, Chuckles is seen welcoming Mr. and Mrs. Potato Head.

During the end credits, Woody shows him a drawing of him smiling made by Bonnie. This caused him to smile, presumably for the first time in years. He is also shown smiling as he and the other toys gather around to enjoy Buzz and Jessie perform a pasodoble to the Spanish version of the song "You've Got a Friend in Me" in front of them.

In "Hawaiian Vacation", Chuckles is seen when Woody announces to the toys that Bonnie has left on vacation for her winter break. A little later, he is seen playing poker with Buttercup, Hamm, and Mr. Potato Head (who got interrupted by his wife). In the end, he is playing a peaceful song on a lunchbox to Barbie and Ken (who are having dinner) with a guitar but performs a faster song with the Aliens and Monkeys when Buzz starts performing a fire dance while in Spanish Mode.

Chuckles sharing the story of how Lotso came to rule over Sunnyside Daycare to Woody.

Chuckles, Lotso, and Big Baby riding on the back of a Pizza Planet Truck.

Chuckles smiling for the first time in years.

Chuckles singing a peaceful song while playing the guitar.

Chuckles performing with the Aliens and the Monkeys while Buzz is doing fire dancing. 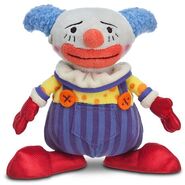 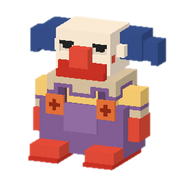