Selling fuel
Chug is a supporting character in the 2013 Disneytoon Studios animated feature film, Planes and its 2014 sequel.

Fuel truck Chug is a guy's guy. He works hard as co-owner of Chug and Dottie's Fill 'n Fly service station—and plays hard indulging in his own fuel from time to time. He has a big personality and is a bold supporter of Dusty's high-flying endeavors. Indeed, he's not only Dusty's buddy, he's his coach and biggest fan. And if Chug can't help Dusty reach new heights, he'll find someone who can.[1]

Chug's livery consists mainly of dark green, with a yellow stripe across his sides, and an orange hood. He has brown eyes, along with a chrome grille, which suggests that he is modeled after a 1940s Chevrolet truck. His bumper is also chrome, and he has a tan crane arm which also holds a fuel nozzle. Additionally, he wears what appears to be a chrome piece of metal over his eyes that is like a sun hat. On the sides of his fuel tank, there are orange, straight lines with yellow borders and a logo showing grain. He even holds containers on each of his sides. By size and behavior, in human age, he is late 30s (Planes) and he is early 40s (Planes: Fire & Rescue).

His fuel tank and nozzle are used to refill planes and, on one occasion, Mayday the fire truck. He is good friends with Dottie and Sparky. He is also a friend and fan of Dusty Crophopper.

He first appears filling some fuel cans for Sparky to take to someone, before preparing for Dusty's racing practice. However, during the practice, Dusty receives a mechanical problem and goes to Dottie. Chug soon arrives, telling Dusty that he was doing well, but soon realizes what he had said when he sees Dottie with an angry look, as she tells Dusty that he is not meant to race due to being a crop duster. She informs about all of the problems that could happen if he pushes it too far, and then acts out as Dusty crashing into an orphanage. However, Dusty does not give up, as he says that the act is why they need her to come with them to the Wings Around the Globe qualifier. Hearing Dottie say that he is unbelievable, Dusty repeats it to Chug, who only becomes upset about the orphans in Dottie's act.

Dusty and Chug then watch a show of crashes in the Wings Around the Globe on TV, which Chug claims to like. Feeling that they need some help, Chug suggests to Dusty to get help from Skipper Riley, a grounded plane who used to be in a squadron called the Jolly Wrenches. At first, Dusty does not think he should be trained by a plane who has not flown for years, but Chug convinces him by saying that Skipper is at least a plane. They then come to Skipper's Flight School, where Chug explains to Dusty about Skipper's squadron. As soon as Dusty rings the doorbell, Chug hides while Dusty tries to ask Skipper to train him, but Skipper does not agree, just closing the door. Chug tells Dusty to try again, saying that Skipper is warming up to him. However, Skipper still refuses to help Dusty, and Chug suggests to Dusty to try the building's back door, to which Dusty gives up.

Chug and Dusty travel to Lincoln, Nebraska for the qualifier, also bringing Dottie along. While the rest of the planes are setting their times, Chug fills Dusty up with fuel ready for him to set his time. The attenders begin to make fun of Dusty, with Ned and Zed saying that he might be racing "that leaky, old fuel truck next to him." Feeling insulted, Chug threatens to shoot fuel at them, but is stopped by Dottie telling him to not lower himself to their level. However, to their dismay, Dusty ends up in sixth place, which is not enough to be qualified, and they travel back to Propwash Junction, feeling disappointed. While Chug is giving fuel to his friends, he notices a Wings Around the Globe official named Roper arriving in the town. He has come to tell Dusty that he is in, because one of the top five qualifiers was disqualified for using illegal fuel.

Chug joins Sparky and Skipper to help get Dusty trained for racing, and he eventually completes his training. Afterwards, they all bid farewell to Dusty as he leaves for New York City, staying in contact with him via the radio.

As Dusty's popularity increased, Chug's line of Dusty merchandise began to sell successfully, enough that it buys his friends flight tickets to meet Dusty in Mexico. Unfortunately, Dusty ends up extensive damaged due to sabotage from Ned and Zed and flying below a tropical storm. Worse than that, Dusty had learned that Skipper had lied about his war record.

As a dejected Dusty is soothed by Dottie, with Chug giving silent emotional support, the other racers appear to donate parts to repair Dusty in time for the final leg. While Dusty was being repaired, Chug reviewed footage of all of Ripslinger's races and realizes that Ripslinger slows down before crossing the finish line so onlookers could snap pictures of him, and passed on this advice to Dusty.

The next day, Chug and company go on ahead to New York to await the victor. Sure enough, Dusty catches up to Ripslinger and takes advantage of his ego to pass him and win the race. As everyone celebrated the new champion, Dusty thanks Chug for his help. Subsequently, everyone was delighted to see Skipper flying again.

Chug reappears in the sequel, first cheering on Dusty as he wins several races. When Dusty is in an interview with Brent Mustangburger, he credits his friends for his success, namely Chug for being the best fuel truck he could ask for. A confused Sparky pointed out that Chug was their gas consultant, which Chug proudly responds that he has got gas. Soon afterwards, he is seen giving some fuel to Dusty back at Propwash Junction, noticing that Dusty has a secret of racing after seeing him pictured on a newspaper winning a Red Bulldozer race with his eyes closed. As Skipper takes Dusty out on a flight, Chug informs him to have his eyes open.

However, the flight was not so long, due to Dusty receiving a technical problem. Hearing this, Chug comes to Dusty while Dottie is checking what had happened, thinking that the problem was caused by his fuel, which he stated to have been tested that morning. Dusty tells him that there is nothing wrong, to which Dottie then explains that Dusty's gearbox is starting to fail. Unfortunately, it has come out of production a while ago. Knowing that Dottie is a mechanic, Chug asks her to build a new one for Dusty, to which she declines due to the fact that it is too complex to build one solo. Upon learning that Dusty will have to not go too fast, meaning that he cannot race again, Chug and Sparky get into contact with a marketing manager to see if there are any gearboxes of his kind available, and inform Dusty that they will try to find one for him.

But while they argue with Leadbottom when he offers Dusty his former job of crop dusting, Dusty disappears and takes a flight to test his limits, only to crash into the Fill n' Fly's tower, which falls down and causes a part of the propeller roof to hit a fuel dispenser and set on fire. When Mayday's fire hose receives several leaks, he gets a plan of toppling the town's water tower with the help of Chug, Dusty and Skipper. The plan works, putting the fire out, but an inspector named Ryker shuts the town's airport down until a second firefighter is hired, threatening their annual Corn Festival.

Soon, Chug and Sparky make sure the road to the town is clear for Dusty to take off for Piston Peak National Park, after he suggests becoming the town's second firefighter. Before leaving, Mayday informs Dusty that the Air Attack team's leader Blade Ranger will train and certify him. Chug, along with Sparky and Skipper, later contacts Dusty on the radio to say that the manager has got a gearbox for him and will have it delivered in a couple of days. However, when it arrives, they find that it is the wrong type due to the crate being mislabeled. They phone every company around the country, but hear that they do not have the correct type of gearbox, which they later contact Dusty about this.

Some time later, Chug gets crowned official Corn Colonel, with Sparky as his Private Niblet. He is also pleased with the fact that the town's airport is reopened by Ryker with Dusty being certified and hired, along with being given a new gearbox built by the Piston Peak Air Attack team's mechanic Maru. Chug is last seen commentating for an air show hosted by the town's Corn Festival, which has Dusty and the Air Attack team take part.

Propwash Junction hosts an air show to promote Vitaminamulch. Chug and Dusty eagerly await stuntvehicles Air Devil Jones and Vandemonium to arrive, the former eccentrically dressed up for his idols, only to hear from Leadbottom and Sparky that their guests were being held up in Flagstaff. Leadbottom panics, as major fertilizer distributors were in the crowd and would not but Vitaminamulch if the crowd turns into a mob. He then gets the idea to dress up Dusty and Chug as Air Devil Jones and Vandemonium respectively, albeit unconvincingly. The pair attempt to do the stuntvehicles' running landing on top of Chug, but the fuel truck makes Dusty panic upon mentioning that he's filled with avgas. Their blunder causes the crowd to lose interest in the show. Hoping to salvage the show, Chug attempts the stunt again, only to crash into Sparky, who accidentally punctures a hole in his tank, causing fuel to leak out. Worse, Sparky was tied to Chug and accidentally ignited the fuel, causing a flame that starting chasing the avgas trail he was leaking. This unintentionally peaked the crowd's interest as Chug drove for his life to avoid the flame, incidentally lightning a set of fireworks while knocking down the Corny mascot. In the end, Dusty gets snagged on Chug and the trio are launched into the Vitaminamulch statue, Vitaminame, with a box of fireworks, causing to it launch high into the sky and explode with fertilizer showering on everyone. Everyone then cheers. Vitaminamulch thanks the trio, before telling them they have a three o'clock show to perform. 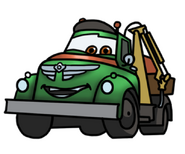 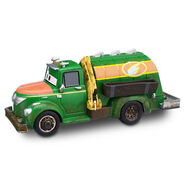