Disney's Adventures of the Gummi Bears

Gummerset
Chummi Gummi is a character from the Disney's Adventures of the Gummi Bears episode "Up, Up, and Away".

Chummi is the last Gummi from Gummerset, having outlived the other Gummies of his colony when he grew up, due to being the youngest.

He travels to Gummi Glen with his airship, to find the hundreds of Gummies, but only finds six. He easily befriends them all, but is most fond of Cubbi, as he relates to the youngster after having been the youngest among his peers as well. Realizing the possibility of Cubbi becoming to last Gummi of Gummi Glen, Chummi offers to take all the Gummi Glen Gummies with him to New Gumbria, aboard his airship.

His generous offer is initially accepted. Eventually however, the Gummies realized that they do not want to abandon their caretaker duties and just leave their ancestral home behind. Only Cubbi chooses to make the journey, hoping to finally get the chance to be trained as a Gummi knight upon arrival across the ocean.

During the journey, Chummi's airship is taken down over Drekmore Castle by Duke Igthorn and his Ogres, who seek to use it as a war machine against Dunwyn Castle. 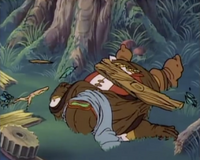 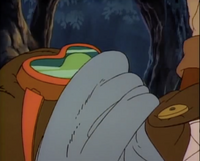 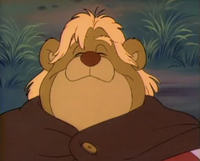 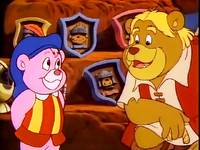 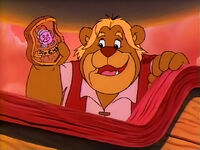 Retrieved from "https://disney.fandom.com/wiki/Chummi_Gummi?oldid=4484157"
Community content is available under CC-BY-SA unless otherwise noted.