Disney Wiki
Register
Don't have an account?
Sign In
Advertisement
in: Objects, Articles of Clothing, Those destroyed,
and 3 more

To wear for the ball

“When they ruined my ball gown, that's not all they tore apart.”
―Cinderella to Sofia on how to make amends with Amber

Cinderella's Dress is a garment featured in the 1950 animated film, Cinderella, and the 2015 live-action film.

It is an old dress that had belonged to Cinderella's late mother and was stored in an old trunk in Cinderella's room.

After being tricked into thinking that she has a chance to attend the ball, Cinderella rushed back to her room in search of something suitable to wear to it, and finally pulled out a pink-and-white dress from an old trunk.

It had puffy pink sleeves with white ruffled edges, and its bottom was white, with more ruffled edges. After twirling around with it in excitement, Cinderella showed it to her mice and bird friends, explaining that it was her mother's. One of them noted that even though it was beautiful, it was also old. Cinderella agrees that it is a little old-fashioned, but she could fix it up to make it more stylish, and proceeded to pick a new fashion that her friends all agreed with. However, she would have to shorten the sleeves, add a sash and ruffle, and get something for the collar.

Unfortunately, her stepfamily demand that she come and help them get ready, and she concluded that she could not do the alterations until later. Jaq realizes and sadly points out to the others that it was all part of her stepfamily's evil scheme: they would burden her with so many chores that she would have no personal time to amend the dress, and thereby be unable to go to the ball.

Hence, the friends decide to do the alternations for her, and Jaq and Gus were sent to get the necessary trimmings, which they successfully find in the form of Anastasia's pink sash and Drizella's green beaded necklace, both of which were thrown away by them in a fit of anger.

Later on, as Cinderella despairs over being unable to go to the ball due to not having had the time to alter the dress, her friends reveal it newly-styled, exactly in the fashion that she had picked: pink with white lace held up by light pink sashes and bows, sleeves shortened into oval shapes that left the arms bare, and a light pink ribbon tied into a bow at the bodice. There was even a necklace of green beads for her to wear around her neck. Overjoyed, she thanks them.

She puts the dress and necklace on, slips into a pair of pink dancing slippers, ties a white ribbon in her hair, and races down the stairs just in time to join her stepfamily.

However, when her stepsisters recognize their old items, they violently tear them off her dress until Lady Tremaine stops them. With her dress now reduced to shreds, a heartbroken Cinderella runs out to the garden and cries, where her Fairy Godmother appears to help her go to the ball. It is then turned into a beautiful sparkling blue-white ball gown until midnight, when it reverts back into tatters again (except the glass slippers).

The dress also appears in the live-action remake. It was still Cinderella's late mother's old dress, but it is Cinderella herself who alters it this time, with some help from her good mice friends. After it had been altered, it was presented as a simple-styled, somewhat old-fashioned, yet still elegant and beautiful gown made completely out of blush-pink soft chiffon, with puffed sleeves and a ruffled neckline.

Unfortunately, its final fate (before Cinderella encountered her Fairy Godmother) was also identical to that in the original film: being damaged to prevent Cinderella from going to the ball. The only difference was that instead of Anastasia and Drizella tearing it to shreds because of seeing their sash and beads on it, Lady Tremaine was the one who did so as she did not want Cinderella to go to the ball.

The dress is used in this TV series, although Cinderella doesn't wear it at all, as she was usually depicted in her classic ball gown instead. It is presented in good condition in its appearances, except in "Ladies' Night", when it is shredded. In the episode "Ladies' Night" when Minnie Mouse wears it in a fashion show, it magically changed into a shredded one.

In the episode "House of Scrooge", Cinderella lends the dress to Mickey Mouse after Scrooge McDuck confiscated his toga clothing. He thanked her, but she replied "That old thing?" After the electricity goes off, he then changed back into his regular House of Mouse host clothing.

In the direct-to-video movie Mickey's Magical Christmas: Snowed in at the House of Mouse, the dress is used as a Christmas present to Cinderella from her friends during the song "The Best Christmas of All".

The dress plays a role in the game as part of Ventus' quests to gather materials to make it. After Jaq finish it, they present it to Cinderella.

The dress appears in the third episode of the sixth season, titled "The Other Shoe". In this version, instead of being torn to shreds by the stepsisters, one of them tosses it into the furnace instead. Hence, what was saved of it was mostly covered in cinders, prompting the stepsisters to come up with and bestow Ella her unfortunate, infamous nickname.

Cinderella amazed to see the dress

Cinderella with the dress

Cinderella in her new dress

The dress being ripped apart by the stepsisters

The Dress transformed into Silvery Blue one by Fairy Godmother

Cinderella back in her shredded dress once again

Cinderella in her ruined dress in Kingdom Hearts: Birth by Sleep 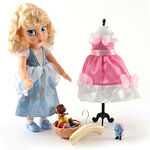 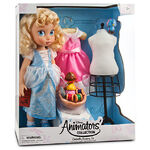 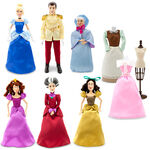 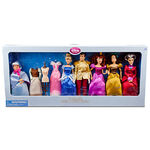 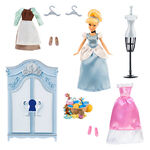 The Mice presenting Cinderella's pink dress as Christmas gift in Mickey's Magical Christmas: Snowed in at the House of Mouse

The dress in Once Upon a Time