Once Upon a Time (mentioned only)

Before his death: Lady Tremaine, Drizella and Anastasia, Lucifer

Dies, leaving his daughter in the hands of Lady Tremaine
Cinderella's Father was a good-natured, handsome, and wealthy gentleman, possibly a baron or a lord, in Disney's 1950 animated feature film, Cinderella.

He loved his only daughter, Cinderella, with all his heart and lavished every imaginable care and tenderness on her. His grand château attests to his great wealth. His wife had died when Cinderella was very young.

Despite the fact that he did everything to make life better for Cinderella, he was depressed by the death of his wife and felt Cinderella needed a maternal figure, so he remarried; his second wife being Lady Tremaine, who had two daughters of her own, Anastasia and Drizella. He welcomed them into the family, and it seemed his second marriage ran smoothly until the day he died.

Upon his untimely death, Lady Tremaine showed her true colors. She tyrannically took over his château, the remnant of his fortune (which she squandered on Anastasia and Drizella), and even forced Cinderella to become the servant of her own house. As a result of this, his château "fell into disrepair", his fortune tragically dwindled and was eventually exhausted.

The narrator described him as "a kind and devoted father, and gave his beloved child every luxury and comfort". Presumably, he acquired the dog, Bruno and horse, Major, as gifts for her, or it could have been that they originally belonged to him and she inherited them upon his passing.

However, he still felt that she needed a mother's care, and therefore he married again. His second wife was Lady Tremaine, a handsome and dignified woman with two daughters, Anastasia and Drizella, just Cinderella's age.

It seemed his second marriage ran as smoothly and successfully as he had hoped. However, upon his untimely death, his second wife and stepdaughters revealed their true nature: cold, cruel, and heartless. Lady Tremaine, to whom all his wealth and his château had been left, revealed her bitter jealousy of Cinderella's charm and beauty now that she was freed from her husband's watchful eye. She squandered most of his fortune on Anastasia and Drizella, whose interests she was grimly determined to advance, while Cinderella was abused, humiliated, and finally forced to become the servant of her own house.

Despite all the abuse and mistreatment she had to endure under her cold, unloving stepfamily, Cinderella remained ever gentle and kind, and finally found the happiness she sought simply by keeping faith in her dreams. Hence, it could be theorized if her father were to look down from Heaven, he and his first wife (her biological mother) would definitely be extremely proud of her, and be considerably consoled that she no longer had to suffer because of his terrible choice of a new wife.

In the 2015 live-action remake, he is played by Ben Chaplin. His role in this film is expanded.

As a reference to the Brothers Grimm's version of the story, here he is portrayed being a merchant rather than a nobleman. He loved his family dearly, and brought tributes from his business trips abroad for his daughter, Ella, when he returned. One was a lavender-and-pink toy butterfly, which was particularly cherished by her.

He seemed to be more heartbroken than Ella was when his wife died, being described as "much changed" by the narrator, and by the time Ella was a young woman, he appeared to have to use a cane to get by. After ensuring Ella's blessing and approval, he married Lady Tremaine, partly out of a desire to have a second chance at happiness, and partly to give Ella a new family to keep her company.

He warmly welcomed his new wife and stepdaughters to his home, and was again assured that his decision was accurate after Lady Tremaine presented the convincing appearance of being fine with his late wife's memory, and rebuked Anastasia for a particularly rude comment about his home. However, he grew to have little to no interest in Lady Tremaine's attempts to restore life and laughter to there (hosting parties to which even the nobility were invited, where fine wines flowed and were consumed in excess, and everyone played cards and gambled), stating that they were nothing special, being all the same. He also appeared to have to leave on more and more trips to keep up with the increasing expenses.

On the night before he left on what was to be - unbeknownst to everyone, including himself - his very last trip, he had a heart-to-heart chat with Ella, in which he started off by asking what gift she would like him to bring her back from abroad. As another reference to Grimm, she requested him to bring her the first branch that brushed his shoulder on his journey. When he remarked at her strange request, she explained that he would have to keep it with him and think of her, and when he brought it to her, it will mean that he will return it, which was what she genuinely wanted: for him to come home to her no matter what.

At this, they share a hug, and he assures her that he will return. He also tells her to be kind to her stepfamily, though he acknowledges that they could be "trying at times". He assures her that he will always leave a part of him with the house, and her mother is always present, though she could not see her, and that what why they must always cherish the house for her, for she is the very heart of it. They conclude their chat by confessing and confiding in each other as to how much they still miss her. Most unfortunately, Lady Tremaine overheard the conversation, and was stung to the core by it.

While he was away, her sole comfort were his letters, especially given Lady Tremaine's subtle abuse of her.

However, one afternoon, she received the most terrible news: he took ill on the journey and passed away. Till the end, he spoke only of Ella and her mother, and the farmer who delivered the news was told to give her what was an irrefutable testament of his love for her: the tree branch that he had promised her. The combination of this testament, her stepfamily's misdirected grief over his passing, and the knowledge that she was now effectively orphaned caused her to break down.

Though things turned for the worst for her - being forced to become the servant of her own house and spitefully renamed "Cinderella", she utterly cherished the memory of him along with her mother. When asked by one of her former servants as to why she stayed in the house when her stepfamily abused her so badly, she answers that she had promised her parents to cherish it where they were so happy. They had loved it, and now that they are gone, she loves it for them, and acknowledges it as her home.

During the first - and last - heart-to-heart confrontation between Ella and Lady Tremaine, the latter acknowledged that her marriage to the former's father had been for the sake of her daughters, but she was still unbearably jealous of his love for Ella (his biological daughter). Despite knowing her stepmother's cruelty well, and her one and only chance of happiness was at stake (her glass slipper being in her stepmother's hands), Ella refused to relent to her demands, confessing that one of her greatest regrets was failing to protect her father from Lady Tremaine. Even after Lady Tremaine shattered the slipper and locked her in her room, her spirit was unbroken, as she drew strength and comfort from positive memories - such as the happy times she shared with her parents.

At the end, it was revealed that a royal portrait of him had been painted along with his wife, and Ella remarked that her and Kit's parents would have loved one another. 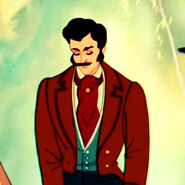 Cinderella and her father in the prologue.

Cinderella's father in the 1952 Golden Book.

Cinderella's father with his family in the 2015 film.
Add a photo to this gallery

Retrieved from "https://disney.fandom.com/wiki/Cinderella%27s_Father?oldid=3727725"
Community content is available under CC-BY-SA unless otherwise noted.