Cinderella from the original Rodgers and Hammerstein adaptation

Cinderella from the 1950 Disney film of the same name

Princess
Servant to her stepfamily (formerly)

To have a new life. (succeeded)

The castle
Her stepmother's house (formerly)

Being a servant in her own home, not being treated as a person, her stepfamily's treatment of her

"Well, I don't know much about hats, but, I don't think it flatters either one of you."
Cinderella is the main protagonist and titular character of Rodgers & Hammerstein's 1997 musical film of the same name.

She, as always, lives with her stepmother and stepsisters (named Calliope and Minerva in this version). She intends to live a life different from the one she currently leads.

During a shopping trip in the village, Cinderella struggles under the weight of the purchases of her ill-tempered Stepmother and her quarrelsome stepsisters Minerva and Calliope. Spying an unusual purple hat with long pink feathers, the sisters start fighting over it. They ask Cinderella to decide who it looks best on, but she tells them that although she doesn't know much about hats, she doesn't think it suits either of them, much to their affront. As she waits for them to finish shopping, Cinderella is distracted by a children's puppet show involving a prince searching for his love. As they step out of a shop, her family snap her out of her absorption by handing over their new packages for her to carry. Meanwhile, Prince Christopher is also strolling through the marketplace disguised as a peasant. The two meet when the prince rushes over to help Cinderella after she is nearly crushed by a royal carriage. As they talk, they realize they are both dissatisfied with their confining lives. She is charmed by his sincere, direct nature while he is drawn to her honesty and integrity. Their conversation is cut off when Cinderella's stepmother scolds her for talking to a stranger and for not keeping up with them. Prince Christopher reluctantly leaves, but tells Cinderella that he hopes to see her again.

On another trip to the marketplace a day or so later, Cinderella and her stepfamily hear that the Prince is giving a ball in order to find a bride, much to their excitement. Determined to see that one of her daughters is chosen to be the prince's bride, the Stepmother begins planning their big night. Cinderella asks her if she, too, can attend the ball, but her stepmother finds the idea laughable. She reminds Cinderella of her poor status and warns her against dreaming of splendor. As if to underscore the point, her stepsisters command her to bring them warm milk and hot water. As Cinderella enters the kitchen, she reflects on her meekness and obedience. She takes solace from her little chair in front of the kitchen fire and dreams about being whatever she wants, from a Peruvian queen to an Milanese prima donna.

As the Stepmother coaches her daughters on how to win the prince's heart by hiding their flaws until after the wedding, Cinderella questions this thinking. She believes that a man should love them for who they really are, flaws and all. The stepmother snaps that the ball has nothing to do with love, but everything to do with the business of finding a husband. Cinderella helps them prepare for the ball, and, despite how they refuse to let her join them, she waves as they depart before mournfully going back inside. She tries to take comfort from her chair in the corner by pretending that she's the belle of the ball, but her heart just isn't in it. The reality that she has been left behind and his all alone is too strong to be dreamt away, and she tearfully wishes that she could go to the ball.

As the carriage pulls up to the palace steps, the Fairy Godmother reassures her goddaughter that she can handle this, but she'll have to handle it alone if she wants her wish to come true. Nervous yet excited, Cinderella arrives in the middle of a dance, catching the Prince Christopher's eye. The whole room stumbles to a standstill as he gazes at her, transfixed. The prince takes her hand and they begin to waltz together, gradually filling the room with dancing once more. She and Prince Christopher whirl right out into the palace gardens where they can be alone to enjoy one another's company, strolling among the flowers and fountains. They eventually decide to rejoin the ball where they are soon joined by an intrigued King Maximilian and Queen Constantina. They each speak to Cinderella and ask about her background, happy that their son appears to enjoy spending time in her company and wishing to know more about this "mysterious princess" who will hopefully become their daughter-in-law. Unfortunately, the questions about her family make her uncomfortable, and when she spots her stepmother heading straight for them she flees outside where her Fairy Godmother is waiting. Cinderella wants to go home, but the Fairy Godmother accuses her of giving up. She provides moral support, but vanishes when Prince Christopher emerges from the doorway.

Having followed Cinderella out into the garden, the pair wonder if their mutual attraction could be love. The prince tells her that he feels like he can truly be himself around her, not who people expect him to be, a feeling Cinderella understands. Just as they share their first kiss, however, the clock strikes midnight. She runs as fast as she can out of the palace, losing a glass slipper in her haste. Just as she dashes down the stairs the magic begins to drain away, leaving her once again in her rags running past the smashed pumpkin that was once her coach. The prince chases after her but is unable to catch her, and is left standing with only her shoe as a clue to her identity.

Cinderella manages to make it home before her stepfamily and listens to their exaggerated tales of being at the ball, although they concede that there was a "princess something-or-other" that also captured the prince's attention. Cinderella tells them what she "imagines" the ball would have been like, enchanting her stepsisters and arousing her Stepmother's suspicions that she may have actually been there. She coldly reminds her stepdaughter that she is common, born from a common mother, and that her father spoiled her with silly dreams that will never come true.

A devastated Cinderella wanders outside, unable to stand much more of this cruel treatment. She prays to her father to help her find the strength to seek out a happier life. Her Fairy Godmother reappears at her goddaughter's misery and advises her to share her feelings with the prince, encouraging her to trust him to love her as she really is.

Meanwhile, the heartbroken prince is determined to find the girl who has charmed him so, even if it means having every single eligible girl in the kingdom try on the glass slipper until he finds the one whom it fits. Eventually, his quest takes him to the Stepmother's home. The sisters and even their mother try on the slipper, but Prince Christopher is absolutely certain none of them are his runaway love. Unseen in the kitchen, Cinderella is packing her things as she gets ready to run away. Knowing that she's in there, her Stepmother and stepsisters hurriedly block the locked door in a desperate attempt to keep Prince Christopher from finding her, but he forces them to open the door, revealing nothing but ordinary kitchen fixtures. Disheartened, the prince prepares to leave.

Once he steps outside the door, however, he spots Cinderella once again almost getting trampled by the royal coach. Recognizing her from their first meeting in the marketplace, he himself places the slipper on her foot, and it fits perfectly. Elated that they have found each other again, they share a kiss.

Waving to everyone they see, the prince and the new princess ride in a coach throughout the streets on their way to the palace, where they wed at the top of the ballroom stairs under the approving eye of King Maximilian, Queen Constantina, and their joyful subjects. 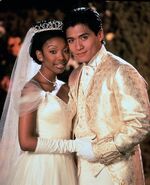 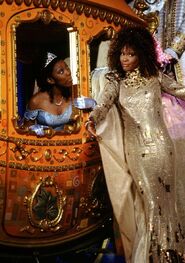 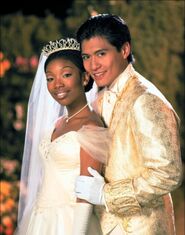 Retrieved from "https://disney.fandom.com/wiki/Cinderella_(1997)?oldid=3840996"
Community content is available under CC-BY-SA unless otherwise noted.