Cleaning, going to the Festival

“If you love me, why would you stray?”
―Cinderella

Cinderella is one of the six tritagonists from the 2014 film, Into the Woods and is portrayed by Anna Kendrick. She is loosely based on the protagonist from the fairy tale of the same name.

Cinderella is a young woman tormented by her stepmother and stepsisters who wishes to go to the King's Festival, and unknowingly embarks on a journey of self-discovery instead.

Cinderella is beautiful inside and out. She is kind, caring and gentle like when she went to comfort Little Red Riding Hood. She is a hard worker and actually enjoys cleaning but hated being a slave. She loved her parents and continues to live by their wishes that she be good and kind even when she is shown cruelty.

However, while she remains good and tries her best to be kind to others, her troubles can get to her. Out of frustration and anger, she accidentally pulled her stepsister's hair too tight and received a slap to the face in response. She also turned on the Witch alongside the Baker, Red Riding Hood and Jack after the Giant left their Kingdom in ruins.

Cinderella can communicate with birds. With her beautiful singing voice, Cinderella can call the birds in the eaves, the leaves, the trees, castles and woods to come to her aid. The birds are not Cinderella's servants and she can't control them but they help her willingly and care for her and are tremendously loyal to her. The birds act of their own accord and do what they think is best for Cinderella. One bird sought her out to tell her of her husband's unfaithfulness while a flock of them blinded the stepsisters to punish them for enslaving Cinderella.

After her father died, her step-mother and step-sisters force her to become a servant. Forced to sleep near the fireplace she is then given the name "Cinderella." They treat her like a slave and she does not like it at all.

At the beginning of Into The Woods, Cinderella is doing her chores while wishing to go to the King's festival.

On the third night of the festival, Cinderella was running from the prince again, only this time, the Prince spread pitch on the stairs, so her feet got stuck on the steps. Cinderella decided to see what he'll do, so Cinderella left him a clue, leaving one of her gold slippers, before running off. (On The Steps Of The Palace) The prince then goes all over the kingdom to find the maiden whose foot fit the gold slipper. At his final stop, he visits Cinderella's house. While he is waiting outside, the Stepmother decides that she wants one of her daughters to fit the shoe and marry the Prince. She cuts off Lucinda's toe and Florinda's heel. When the Prince asks if there are any more maidens in the house, the Stepmother tells him that it is only Cinderella, a "stunted little kitchen wrench which her late father left behind." The prince pays no attention to her as he sees Cinderella behind the house. He then calls for the slipper, and the Stepfamily laughs as he tries the shoe on Cinderella's foot. To their surprise, the shoe really fits! The prince then says Cinderella is his true bride, and carries her off to the palace. Then Cinderella's birds swoop down from the trees and peck out the stepsisters' eyes, leaving them blinded. The next day, she gets married to the Prince, but soon after finds out he cheated on her and they part ways. In the end, she moves in with the Baker.

She throws the bean away and she runs back home, unaware that that magic bean has turned into a giant beanstalk...

During all of this, Cinderella changes into her servant's clothes and heads into the woods to visit Mother's grave, only to find it destroyed.

The Baker (who is looking for Jack) comes across Cinderella who is not allowed to leave the castle unsupervised.

Calling upon her friends, the birds, Cinderella learns of her Prince's unfaithfulness.

She flinches when the prince touches her and when asked what's wrong, she asks him if he loved her, why did he stray and if he's like this now what kind of King will he be? As he goes, the Prince tells her he loved the maiden that was at the ball and she responds by saying that she loved the prince she ran away from and they go their separate ways.

Everyone suggests that it may be her fault because she threw the bean away.

While the Baker and Jack climb the tree, Cinderella looks after the Baker's baby.

Cinderella comforts Little Red and tries to answer her qualms that killing the Giant makes them no better than she is, while the Baker explains to Jack his inability to say what is morally correct. ("No One Is Alone")

She is last seen going sit beside the Baker to listen the story he is telling his son.

It is assumed that Cinderella moves in with Baker and takes care of Jack, Red Riding Hood and the Baker's baby. 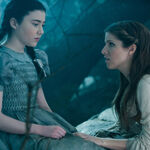 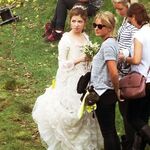 Retrieved from "https://disney.fandom.com/wiki/Cinderella_(Into_the_Woods)?oldid=4351867"
Community content is available under CC-BY-SA unless otherwise noted.