Cinderella's Fairy Tale Hall
Cinderella Castle Mystery Tour was a walk-through attraction at Tokyo Disneyland that ran from July 11, 1986 to April 5, 2006. Centered around the Disney Villains, it is notable for being one of the few uses of The Black Cauldron in the Disney theme parks, with an encounter with the Horned King serving as the attraction's finale.

Taking place inside Cinderella Castle, guests are supposed to take a tour of the Castle featuring the Gallery, Ball Room, Dining Room, Guest Room, and the Tower, with a Cast Member serving as their tour guide.

Upon entering the attraction, the tour guide leads the guests into the Gallery and begins talking about Disney's Heroes and Heroines, with paintings of Cinderella, Pinocchio, Aurora, Snow White, and Taran hanging on the walls nearby. Suddenly, the Magic Mirror appears, feeling insulted by the villains being put down and explains that no hero is complete without a villain. A glowing force of magic then transform the paintings into those depicting the following villains: Cinderella's painting becomes that of Lady Tremaine, Pinocchio's painting becomes that of Stromboli, Aurora's painting becomes Maleficent's and The Witch and the Horned King's paintings morph from those of Snow White and Taran, respectively.

To see how strong the guests are in challenging the forces of evil, the Mirror opens a secret door containing a passage to a dark stairway that leads to a concealed underground area of the castle. The stairway winds past a prison area filled with howling bats staring at the guests. In the Witch's laboratory, a book with a recipe for a poison apple is found. Also, a magic potion is being brewed along with an assortment of experimental tools. Moreover, the crow from the film stands atop a skull with ceaseless cawing. The shadow of the Queen can also be seen on the walls.

There is a dark passage and dungeon that awaits guests who bypassed the laboratory to avoid being noticed by the Queen. However, guests are tricked by a random Magic Mirror that reflects directions inversely. Next, a mummified ghost appears from a dark area but its white reflection does not appear anywhere; rather, we can hear its footprints advancing. The guests also walk past prison cells with skeletons, coats of armor, enchanted chests, and a swinging axe.

A scene featuring Chernabog comes up next, utilizing footage from Fantasia to show him summoning the spirits at Bald Mountain. The score for this version of the sequence is the 1982 digital re-recording by Irwin Kostal. Going past Bald Mountain, guests come to a calm area with water flowing. Nothing seems to be happening, but Maleficent's Goons appear around every corner, in the water and within the walls. The Goons eye and threaten the escaping guests, before angering Maleficent even further. Maleficent's castle on the Forbidden Mountains is then seen, with Maleficent herself sending lightning bolts down towards the guests, with the thorns reaching down to their level. Continuing down the dark passages, guests encounter a talking skull and crossbones, warning them of the perils ahead. Entering a cave of hidden jewels, the guests make their way through the treasure-filled cavern, only to encounter a massive sleeping dragon. Lightning strikes as the dragon stirs and awakens, but an escape opportunity presents itself with a special lift controlled by a Goon, which takes the guests and guide out of the cavern and up the castle.

Upon leaving the lift, the guests enter a room with some tapestries depicting the "Legend of the Black Cauldron" hanging on the walls. The guide explains, "Once upon a time, the world was ruled by evil. The Horned King, the evil lord, used the black cauldron (Satan's kiln) to manipulate and control the soldiers of death. Then the courageous and pure-minded hero, Taran, deprived the power of the great kiln using his sword of light. And peace was restored to the world."

The Magic Mirror, in his final appearance, appears again to interrupt the guide and invite the guests to enter a back room next to the tapestries room as the doors close in. It is the Black Cauldron's room! "This is the final challenge. Will good win or evil prosper? The good will face this challenge with courage. The Black Cauldron is waiting to swallow you whole," the Magic Mirror says as he disappears. A guest is chosen as the brave representative to carry the Sword of Light, sometimes a child, against the Horned King. Another door opens to an eerie hall that houses the Cauldron Born lying on the floor. The Sword of Light (Taran's sword) is to the right and the Black Cauldron is at the center atop a pedestal. Slowly, the Horned King appears and looks down to see that his enemy is still alive.

"(Evil laugh) Everyone welcome. In this Black Cauldron, everything in the world is controlled. Don't be afraid. It will all be over shortly. No one can escape from here and you'll be sacrificed to the Black Cauldron. Oh Satan's kiln... awaken and resurrect the soldiers of death! Rebuild an army without rivals! The Army of Death... rise! The devil's servants... go and capture them and throw them into the cauldron! Don't leave anyone behind! The Black Cauldron wants more bodies! I swear to the death! (Evil laugh) Nobody can destroy me...What's that!?! Capture those fools and gratify the Black Cauldron!"

The Horned King proceeds to awaken the Cauldron Born, threatening to kill the guests and use the cauldron to make them join his army. Just then, the special guest points the Sword of Light towards the Horned King and, using its power, defeats the villain and his army by blasting them with a powerful bolt of light and the hero's goodness triumphs! Leaving the chamber, the guests walk past a mural of the sword depicting the message "Good Conquers Evil". The tour guide then makes a special presentation to the new hero, giving them a special medal as a reward. "An official statement from Tokyo Disneyland. We pay honor to the bravery, sincerity, and pure-mindedness of the guest who received power from the sword of light. The guest is now proclaimed a knight of Fantasyland with a memorial medal as Sir (insert name here), the great hero of a great land! GOOD CONQUERS EVIL!"

The Horned King in the finale

The Cauldron Born in the finale 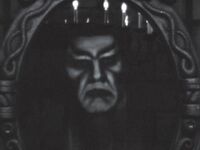 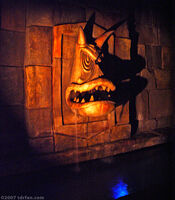 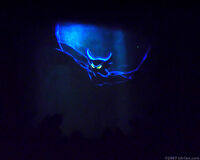 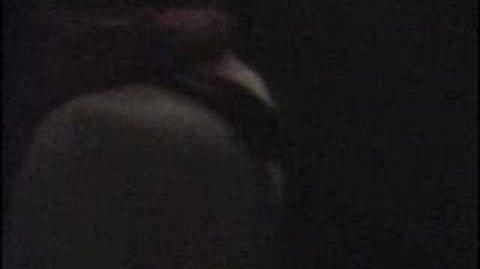 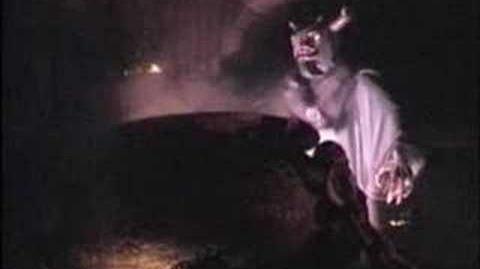